The home of a former Russian spy is to be dismantled, with the roof completely removed by military teams in the wake of the Novichok attack as decontamination work continues.

Wiltshire Council have written to neighbours of Sergei and Yulia Skripal, warning them about the disruption that the deep clean and construction work - expected to take up to four months - will cause.

Detectives believe the pair first came into contact with the poison when it was sprayed on the door handle of their property in Christie Miller Road, Salisbury.

The clean-up has been taking place ever since they collapsed on 5 March, but work paused over Christmas.

The next, more extensive phase of the operation was due to begin on 7 January, according to a letter seen by the Press Association.

Dated 4 January and signed by the council's director of public of health, Tracy Daszkiewicz, it told residents that contractors would spend the first month erecting scaffolding to cover the house and garage with a "sealed frame".

A military team will then dismantle and remove the roofs on the two buildings over two weeks. 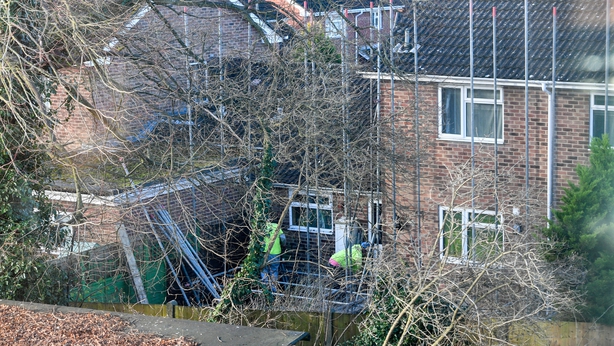 Everything will be wrapped and sealed before being removed from the site, and then the roofs will be replaced, Ms Daszkiewicz said.

The letter said: "This phase includes the removal of the house roof and garage roof at No 47 (Christie Miller Road).

"All materials will be wrapped and sealed on site before being removed safely from the premises.

"Once the covered frame is in place, the deconstruction work is expected to take around two weeks.

"This specialist work will be carried out by the military team.

"When that work is completed, contractors will move on site to build a replacement roof for the house and adjoining garage."

She said the risk to public health remains "low", adding: "The priority is to make sure that the two remaining sites affected by the 2018 incidents are thoroughly cleaned and returned to normal use as soon as possible."

Mr Skripal, 66, and his 33-year-old daughter survived the attack which British Prime Minister Theresa May said had "almost certainly" been approved by the Russian state.

Wiltshire Detective Sergeant Nick Bailey is also thought to have come into contact with the poison when he searched their home.

Dawn Sturgess, 44, fell ill in Amesbury months after the incident and died in hospital in July after coming into contact with a perfume bottle believed to have been used in the attack on the Skripals and then discarded.

Her partner, Charlie Rowley, 45, was also exposed to the same nerve agent but was treated and discharged.

Two Russian nationals have been accused of travelling to the UK to try to murder Mr Skripal with Novichok.

Evidence gathered by intelligence agencies led the British government to conclude that the men were officers from the Russian military intelligence service, the GRU.

The two suspects - known by their aliases Alexander Petrov and Ruslan Boshirov - were caught on CCTV in Salisbury the day before the attack.

A counterfeit Nina Ricci perfume bottle - which Ms Sturgess handled - is thought to have contained the substance.