UK police hunting a knifeman who murdered a train passenger in front of his 14-year-old son have arrested a suspect.

The incident happened on a train in Surrey.

The man was detained at an address in the Farnham area at around 6am on Saturday on suspicion of murder.

A 27-year-old woman was also arrested on suspicion of assisting an offender.

Detective Chief Inspector Sam Blackburn from British Transport Police said: "This is a fast moving investigation and I am pleased that overnight we were able to arrest a man following a huge amount of police inquiries.

"The investigation is moving with good progress and we are now confident to say that this is not believed to be a random assault.

"In the moments leading to the violent killing, both men appeared to be involved in an altercation lasting three minutes.

"Nothing justified the extraordinary violence that followed and we are concentrating our efforts on the on-going investigation."

The son and other family of the 51-year-old man, who who stabbed multiple times, are being supported by specially trained family liaison officers. 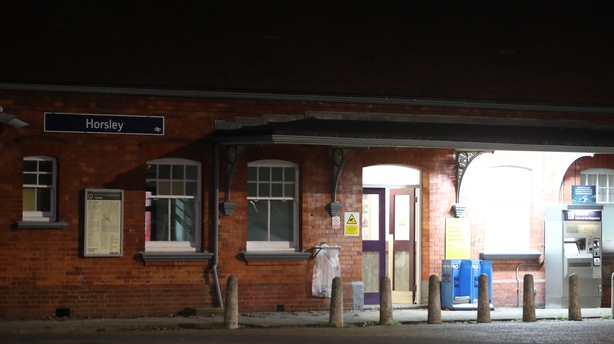 Mr Blackburn, added: "We are continuing our appeal for information and I would urge anyone who was on board the train to contact us as soon as possible.

"Even if you did not witness the assault, it is vitally important we speak with you.

"Likewise, if you have any dashcam footage of the Clandon area after 1pm yesterday afternoon, we would like to hear from you."

BTP Assistant Chief Constable Sean O'Callaghan said: "We now know from inquiries we've been doing overnight and from witnesses that the two men were involved in a verbal discussion, that discussion lasted three to four minutes, it moved through one carriage from where they first boarded into another carriage, and that argument escalated to the unprovoked violent attack that sadly resulted in the death."

Mr O'Callaghan also said detectives are confident with the arrests they have made and no-one else was being sought in connection with killing at this time.

Police had told members of the public not to approach the suspect who struck in front of horrified passengers.

The attack happened on the 12.58 service travelling between Guildford and London Waterloo stations on Friday.

The victim boarded the train at around 1pm on Friday at London Road station in Guildford with his son.

The killer, described as a black man in his 20s to 30s, approximately 6ft tall and of slim build with a beard, also boarded the service at London Road station.

Police say the knifeman left the train at Clandon station and headed in the direction of Dedswell Drive.

The train operator said all lines had been reopened with services returning to normal.