Britain's Prince Harry and his wife Meghan Markle returned home after enjoying a second day of engagements in Dublin, starting with a visit to President Michael D Higgins at Áras an Uachtaráin.

They rang a Peace Bell erected in the garden in 2008 to mark the tenth anniversary of the Good Friday Agreement and toured the grounds with President Higgins and his wife Sabina and their two Bernese Mountain Dogs, Bród and Síoda.

The Duke and Duchess of Sussex ring the Peace Bell at Áras an Uachtaráin, designed to mark the 10th anniversary of the Belfast Agreement #RoyalVisitIreland pic.twitter.com/n1N1YXJlmD

As the royals posed for photos with President Higgins and his wife Sabina inside the Áras, Harry was asked by a reporter if football was coming home.

"Most definitely," the duke replied, laughing.

His tone was more positive than at a garden party at the British ambassador's residence in Dublin last night when he told former Ireland rugby international Brian O'Driscoll he was not as confident as everyone else and wanted to avoid jinxing the result.

As they left Áras an Uachtaráin, Meghan stroked the dogs at the front door before she and Harry shook hands with their hosts and headed off for their second engagement of the day at Croke Park. 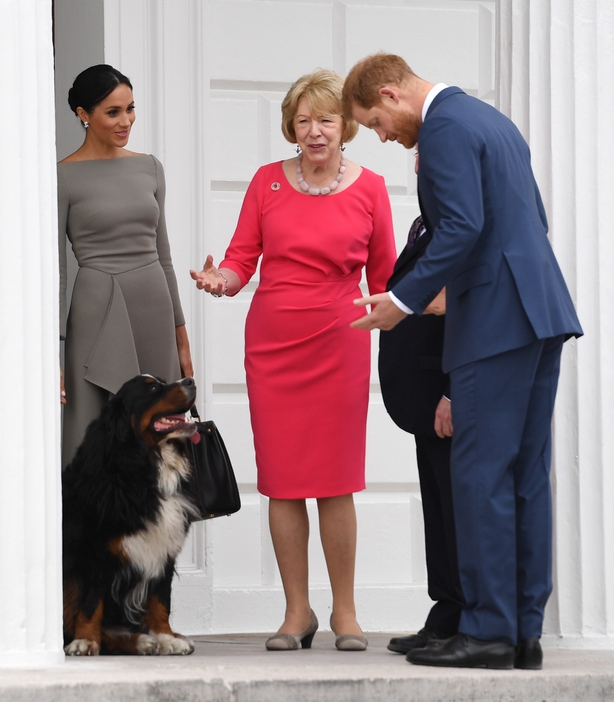 Thank you to the President of Ireland Michael D. Higgins, Mrs Higgins (and Bród and Síoda!) for the warm welcome at Áras an Uachtaráin #RoyalVisitIreland pic.twitter.com/SeDS0LThJ5

The couple were given a tour of the Croke Park museum accompanied by Tánaiste Simon Coveney. 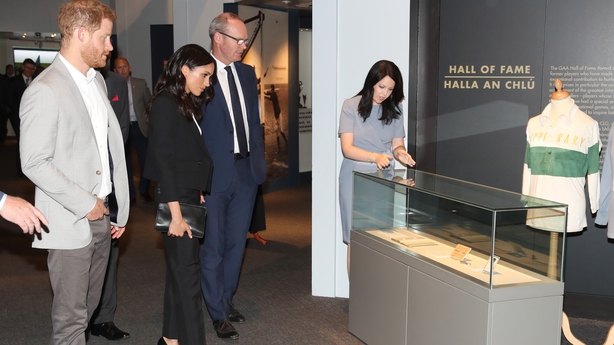 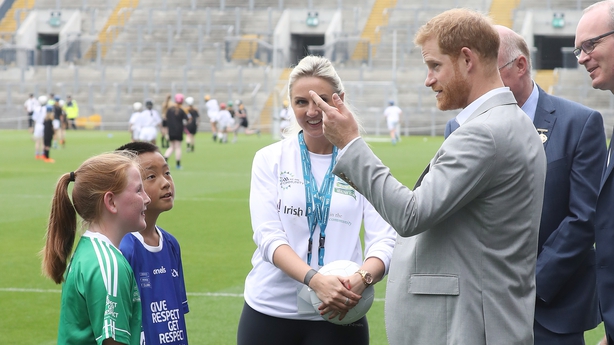 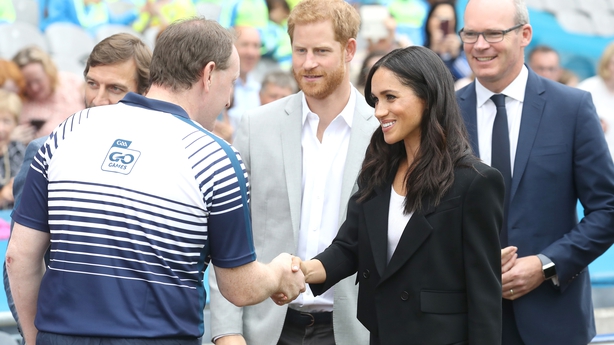 Around 200 children were in Croke Park demonstrating their football and hurling skills. 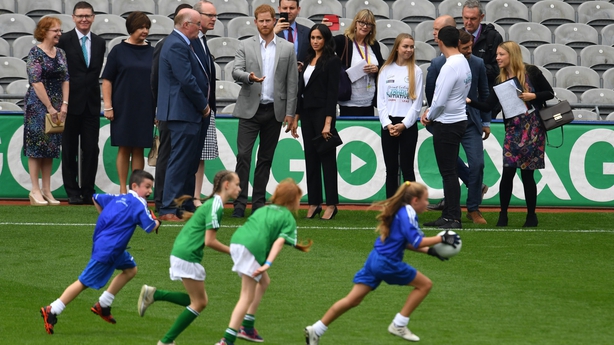 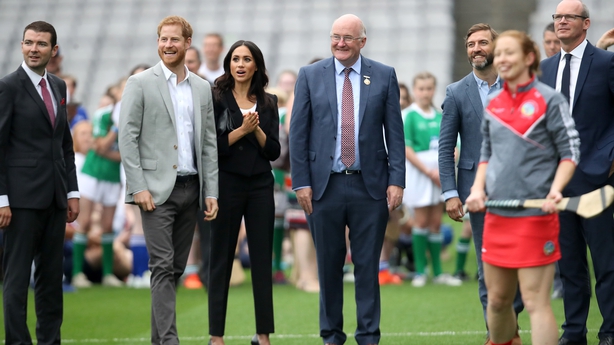 Helen Shenton, the first female librarian at Trinity College Dublin, showed the couple around the historic Long Room of the Old Library built between 1712 and 1732, which houses more than 200,000 books.

Lining the walls of the library are 37 busts of literary greats such as Shakespeare, Aristotle and Cicero, as well as men of Trinity College.

Ms Shenton told Meghan that as the first woman in the role, she plans to install the first female bust in the room.

Meghan replied: "I'll come back and look out for the first female bust."

The Duke and Duchess of Sussex then travelled across the Liffey to the Famine Memorial and EPIC, the Irish emigration museum, which chronicles Ireland's global influence. 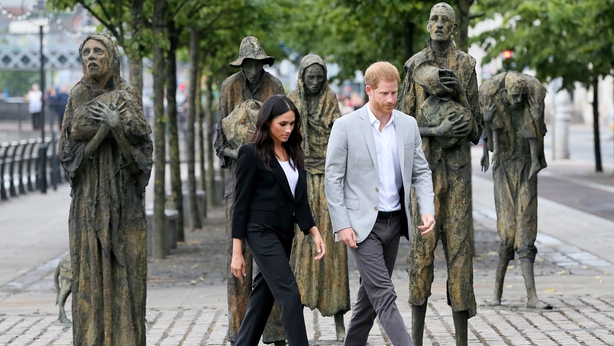 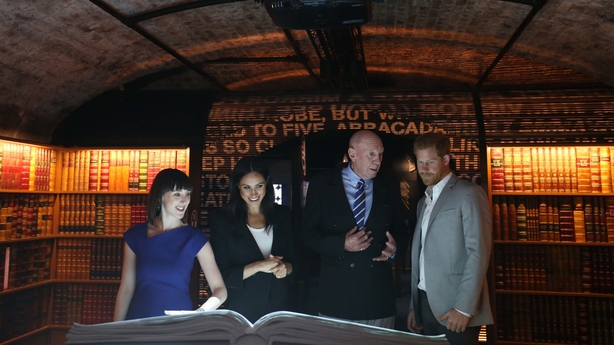 The Duchess is said to have a great interest in science and technology education, particularly for young girls.

There was a strong emphasis on STEM when the royal couple visited Dogpatch labs in the Docklands this afternoon.

They were given a coding demonstration by young people participating in the CoderDojo programme and took part in a discussion on diversity in technology and how to encourage more women to enter the industry.

There was also the opportunity for members of the public to greet the royal couple outside the CHQ building along the quays. 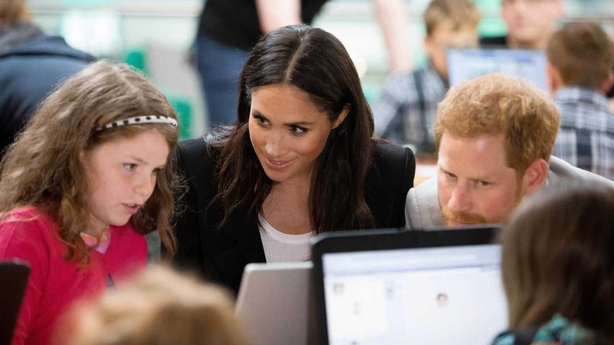 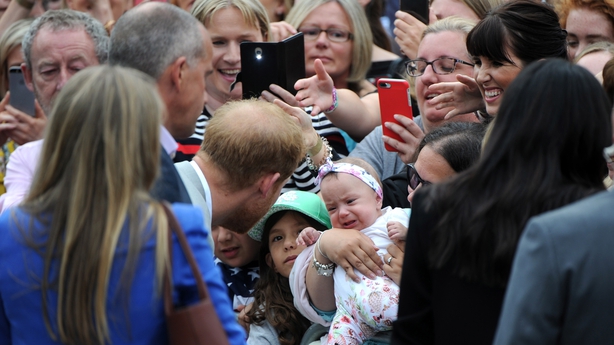 Prince Harry and Meghan Markle arrived in Dublin yesterday for their first royal engagement overseas as a married couple. They left Dublin in the early evening.

'Tánaiste, Ambassador, a dhaoine uaisle' - The Duke of Sussex spoke at a summer party in Dublin last night | https://t.co/QnbNilm0ZY pic.twitter.com/O3Iq4LAEYz