Fire chiefs in Britain have requested help from the army to battle a vast moorland blaze that has raged for days.

Around 100 Greater Manchester firefighters are tackling seven separate fronts of fire in an area believed to cover 6km across moorland in Tameside after a number of homes had to be evacuated as a safety precaution on Tuesday night.

The task facing crews is frequently shifting as changes in wind directions create fresh problem areas amid the ongoing heatwave.

A police helicopter was deployed to assess the scene across Tameside - where plumes of smoke can be seen from space via Nasa satellites - and discussions between fire bosses and their military counterparts followed.

Dave Keelan, director of emergency response at Greater Manchester Fire and Rescue Service (GMFRS), said: "We have been liaising with a military advisor on the scene and following those discussions we have requested military assistance from the Ministry of Defence. 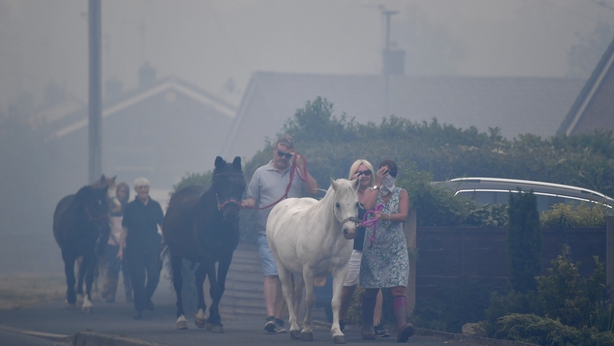 "There's still a lot of smoke from the fire but air quality levels are being monitored regularly in different locations. Air quality is currently at a safe level and therefore residents have been let back into their homes.

"However, the advice from Public Health England remains the same - if you are in an area of smoke please try and keep windows and doors closed and keep hydrated by drinking water, and if you have any health concerns contact the NHS 111 service.

"We don't know the cause of this incident at this stage and it would be very difficult to ascertain the cause due to the extent of the damage but we will be looking into that once we have tackled the fire.

"We've had a great deal of support from the public and charities - people have been donating supplies and we are really grateful, however, we really need people to stay away from the scene."

More than 30 homes have been evacuated near Greater Manchester as firefighters battle a major moorland blaze pic.twitter.com/eDLHl9GsJE

That assistance could include the utilising of extra personnel, four-wheel drive vehicles and possible air support, said Mr Keelan.

Water firm United Utilities has provided a helicopter that can be used to drop water from height to areas of the fire that is difficult to access from foot, while Derbyshire Fire and Rescue Service and the North West Ambulance hazardous area response team are also assisting.

Air quality levels in the area are being monitored regularly in different locations and air quality is at a safe level, with people in affected areas urged to keep their windows and doors closed.

Experts warned that high levels of pollutants generated from the blaze, which started on Sunday, could have a significant effect on people's health.

Hugh Coe, professor of atmospheric composition at the University of Manchester, said plume peak concentrations were "very high" and air quality close to the fire was "very poor".

He said pollution plumes have been detected in the centre of Manchester.

Mr Keelan said: "We are working with our colleagues in health and we are sampling the air to make sure it is within those safe limits, and we will be informing people in local areas if there is any concern or we need them to do anything in particular." 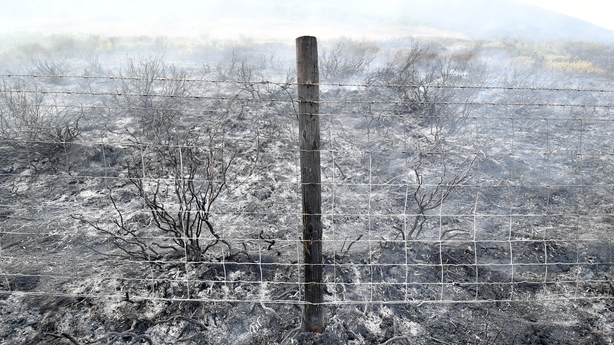 Brenda Warrington, leader of Tameside Borough Council, said: "I think it's fair to say the air is not toxic but it is tremendously irritiating.

"We have no idea how long this situation will continue because it's the weather conditions that will determine that and will dictate to us.

"One of the things we need, and I don't usually ask for this in this kind of weather, is a really, really good downpour, sustained for quite some time."

Four local schools decided to close today for the safety of their pupils.

Among the affected areas is the village of Carrbrook, in Stalybridge, where 34 households in the Calico Crescent area were evacuated last night when strong winds pushed flames near to their properties.

The cause of the original seat of the fire - thought to be at Buckton Hill, which is land above Buckton Vale, Carrbrook - has not been established but fire chiefs said a detailed investigation would be launched at the appropriate time.

One possible line of inquiry could focus on the frequent gathering of off-road bikers - many not displaying registered plates - at a nearby large quarry.