A helicopter pilot should have turned back before he descended into low cloud brought on by a "complex weather system" in the Snowdonia mountains, an inquest has heard.

Company director Kevin Burke, 56, did not see the fast-approaching Rhinog Fawr Mountain and "inevitably" struck the side of it as he was killed instantly along with wife Ruth, 49, brothers Donald, 55, and Barry Burke, 51, and sister-in-law Sharon, 48, who was married to Donald.

The family members, all from the Milton Keynes area, were heading to Dublin on the afternoon of 29 March 2017 for a surprise party.

A hearing at Caernarfon into their deaths was told that "very experienced" pilot Kevin Burke had set off in good conditions near their home but as they passed north Wales they came across thick cloud and turbulence.

The alarm was raised in the early evening when Mr Burke's privately owned Twin Squirrel aircraft did not land at Dublin's Weston Airport at 2.30pm as expected.

Their bodies were later found with the wreckage of the completely destroyed helicopter in the remote Rhinog mountains near Trawsfynydd.

Investigators concluded fellow company director Ruth was in the front passenger seat next to her husband, both from Hulcote, with property developer Donald and his wife, Sharon, both from Bletchley, and Barry, a self-employed property maintenance man, from Oldbrook, sat in the rear.

Consultant forensic pathologist Dr Brian Rodgers said all five suffered massive impact trauma from the collision shortly before 1pm and were identified from their dental records.

He said toxicological tests on Kevin Burke showed he had consumed cocaine at some point prior to the crash but Dr Rodgers said he thought the usage was non-recent and ruled it was "highly unlikely" the pilot was under the influence of the drug at the relevant time. 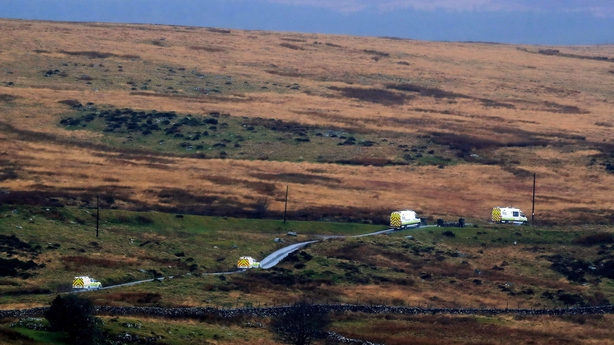 The inquest was told Mr Burke would fly the Twin Squirrel - which was properly maintained and in good condition - at least once a week for business or pleasure.

The terms of his licence did not allow Mr Burke to fly in cloud but he had recently undertaken a licency proficiency test in which he satisfactorily turned away in similar poor visibility.

Mr Hannant said: "The main point about the weather on that day was to begin with it was good but as you got to Wales there was a complex system of weather which brought down the cloud and created turbulence."

He said Mr Burke should have completed a 180-degree turn away from the rising ground instead of continuing to descend.

"The aircraft should have turned round," he added. "Sadly, it did not and struck the mountain."

In conclusion, HM Senior Coroner for North West Wales, Dewi Pritchard Jones, said Mr Burke's training and licence was for flying in conditions where he was able to see the terrain and that "ideally" he should have turned back in the thick cloud.

He pointed out that near Trawsfynydd there was an area of "relatively flattish land" and said: "Had he seen that through the cloud I am certain that would have given him the false confidence that he was at a good and safe height above ground level.

"Unfortunately, Rhinog Fawr is not a mountain that gradually increases in height. It is more a series of walls of steep ridges and rocks.

"My belief is that his instruments would not have given him much warning of the ridges.

"Being at the height he was, it was inevitable he would hit that ridge. It led to the complete destruction of the aircraft.

Recording verdicts of misadventure for all five deceased, he said: "Here we have a situation of sheer bad luck. This aircraft was not greatly below its safe height. It just clipped the mountainside."

Family members attended and were legally represented but did not wish to comment at the end of the inquest.