Britain plans to start Brexit negotiations as planned in the "next couple of weeks", Prime Minister Theresa May told German Chancellor Angela Merkel on Saturday.

"The prime minister confirmed her intention for Brexit talks to begin as planned in the next couple of weeks," Mrs May's Downing St office said in a statement.

Earlier, German Chancellor Angela Merkel said she assumed the UK would stick to its plan for leaving the European Union after the election upset, and that she wanted to work quickly on talks over Brexit.

It dealt a major blow to Prime Minister Theresa May just days ahead of difficult Brexit talks with the EU.

Speaking during a visit to Mexico City, Ms Merkel said Germany was ready for the Brexit talks, which Mrs May said would begin on 19 June as scheduled - although she now risks more opposition to her EU departure plans from inside and outside her party.

"I assume that Britain, from what I heard from the Prime Minister today, wants to stick to its negotiating plan," Ms Merkel told a news conference yesterday alongside President Enrique Pena Nieto.

"We want to negotiate quickly, we want to stick to the time plan, and so at this point I don't think there is anything to suggest these negotiations cannot start as was agreed." 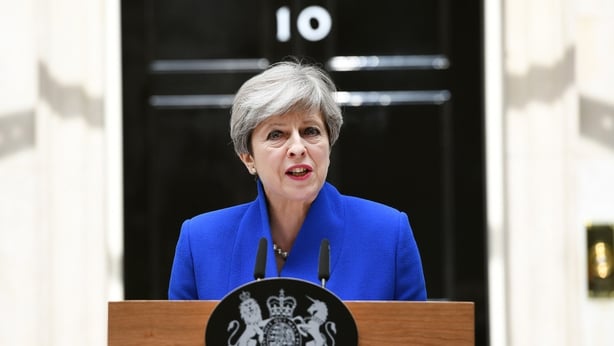 Mrs May, who had called a snap election confident her Conservative Party would increase its majority and strengthen her hand in the Brexit talks, yesterday said she would lead a minority government backed by the DUP.

UK politicians differ widely on what they want from the Brexit negotiating process, seeing it as a way to shift the UK either to the right or left.

Some parliamentarians in both the Conservative and Labour parties want to remain in the EU.

EU leaders expressed concern that Mrs May's loss of her majority would raise the risk of negotiations failing, resulting in a legal limbo for people and business.

Mrs Merkel said Britain was part of Europe regardless of Brexit, and that she wanted the country to remain a good partner.

"Britain is a member of NATO, so we have a lot of shared challenges to deal with, and that's the spirit we want to carry out these negotiations in. But obviously while also asserting the interests of the 27 member states that will make up the European Union in future," she added.