Britons have been bombarded in recent weeks with rival claims from both sides ahead of the referendum on 23 June on whether the country should remain in the 28-nation European Union.

Here is a summary of some of the main claims about economics, the cost of EU membership, migration and security from Britain's government and the Britain Stronger In Europe campaign group, and their opponents from Vote Leave.

"In" campaigners say the average British household would be £4,300 a year worse off in 15 years if Britain left the EU, compared with staying in.

This is based on a Treasury estimate that GDP would be 6.2% lower than if Britain stayed in the EU. It also assumes a trade deal that offers less access to European markets than Britain has now, and reduced economic productivity as a result.

In the short run, the government says leaving the EU would tip the economy into recession, cause more than half a million people to lose their jobs and trigger a fall of more than 10% in house prices and the value of sterling.

The British parliament's cross-party Treasury Committee criticised the £4,300 figure for being unrealistically precise, and for potentially misleading households into thinking their disposable income would fall by £4,300.

But there is a broad consensus among economists in Britain and bodies such as the International Monetary Fund that a Brexit would make Britain noticeably poorer than if it stayed in, even if there is a range of views on the size of the impact.

Vote Leave says it would be in the EU's interests to agree a favourable trade deal with Britain after a Brexit vote, and that Britain would find it easier to do trade deals with non-European countries on its own, rather than as part of the EU.

The most detailed estimate of benefits from leaving the EU comes from the campaign group Economists for Brexit.

It says GDP would be boosted by 2% over the medium term, as consumers would benefit from lower tariffs on imports from outside the EU and British companies could export successfully under the more limited rights available under World Trade Organization rules.

Other economists question how Economists for Brexit have modelled tariff changes in particular, as well as their underlying model of the economy, which differs significantly from those most other economists use.

Vote Leave says EU membership dues cost Britain £350 million a week or £19.1 billion pounds a year, and that this money could instead be spent on healthcare or schools.

The UK Statistics Authority, an independent public body, described these claims as wrong and misleading because it does not reflect an automatic rebate Britain has received for decades which in 2014 reduced net contributions to £14.7 billion pounds.

After further EU transfers to the British public sector and private bodies, for things such as farm subsidies, regional deprivation and scientific research, the net cost fell to an average £7.1 billion, the Statistics Authority said.

Vote Leave says the £350 million figure is justified because the rebate could be scrapped in future and Britain's government cannot control how the rest of the money is spent.

Britain's finance ministry says the economic benefits of EU membership heavily outweigh the annual dues, and that the public sector would have £36 billion less a year to spend in the long run if it left, due to weaker economic growth. 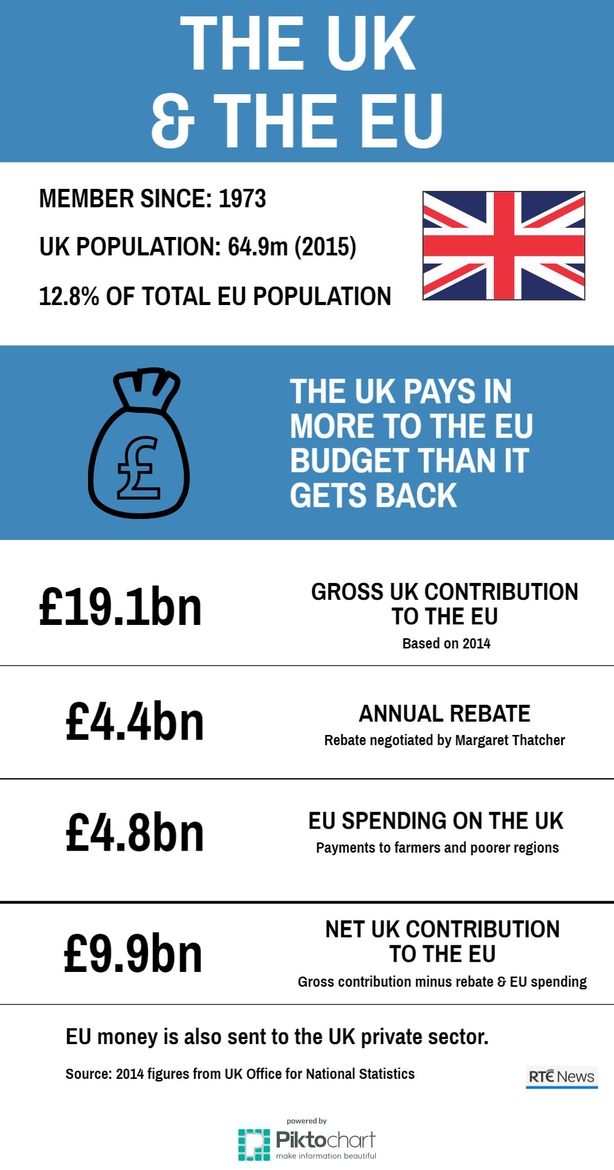 Vote Leave says a quarter of a million immigrants come to Britain each year from the EU, and that they put a big strain on public healthcare and education.

A study by Britain's National Institute of Economic and Social Research last month showed EU immigrants contributed more in taxation than they consumed in public services and welfare, as they were younger than the average Briton and less likely to require medical treatment or be eligible for an old-age pension.

Britain's government points to a deal it has agreed with the EU which will limit migrants' rights to benefits for low-paid work. Many firms say migrants are needed for economic growth.

NIESR said migration has a small negative impact on low-skilled Britons' wages, and that Bank of England research suggested it had probably reduced pay for semi-skilled workers in the services sector by a total of 1% since 2004.

Stronger In says the EU can present a common front on sanctions against countries such as Russia, and allows suspects to be speedily extradited from one member state to another.

More than 400 suspects have been extradited to Britain under European Arrest Warrants since their introduction in 2004, compared with only a handful of US citizens.

Vote Leave says it would be in other EU countries' interests to continue to cooperate with Britain on security after a Brexit, and that EU rules limit Britain's ability to bar or deport dangerous EU citizens.

It also says the EU intends to admit Turkey as a member, pushing the bloc's border out to Syria and Iraq.

British Prime Minister David Cameron has previously backed Turkish efforts to join the EU, but said this month it would be decades before Turkey met the necessary criteria.