A US military dog who lost a leg when sniffing out a roadside bomb has been honoured after serving in more than 400 missions in Iraq and Afghanistan.

Lucca, a 12-year-old German Shepherd, served in the US Marine Corps for six years, protecting the lives of troops by sniffing out munitions.

Her efforts were awarded with the PDSA Dickin Medal, the highest award for animals serving in military conflict.

Lucca is the 67th animal to be honoured in this way and the first US Marine Corps dog to receive the medal.

There were no human casualties during any of her patrols but, in 2012, she lost her leg and suffered chest burns after discovering a home-made bomb in Afghanistan and retired.

Lucca's owner, Gunnery Sergeant Chris Willingham, travelled to London with his pet to accept the medal.

He said: "Lucca is very intelligent, loyal and had an amazing drive for work as a search dog. She is the only reason I made it home to my family and I am fortunate to have served with her.

"Today, I do my best to keep her spoiled in her well-deserved retirement." 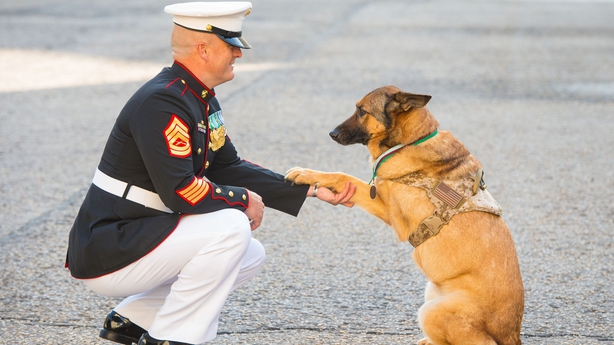 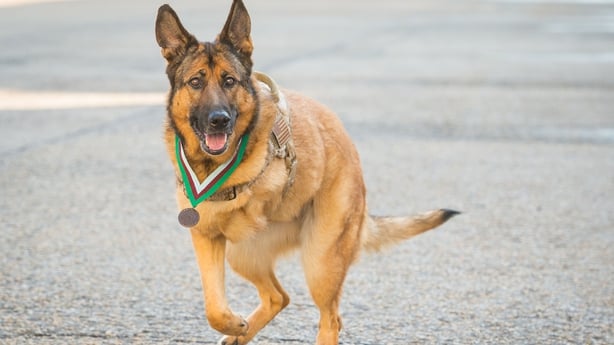 Jan McLoughlin, director general of the PDSA, said: "Lucca's conspicuous gallantry and devotion to duty makes her a hugely deserving recipient of the PDSA Dickin Medal.

"Her ability and determination to seek out arms and explosives preserved human life amid some of the world's fiercest military conflicts."

Since the introduction of the medal in 1943 it has been awarded to 31 dogs, 32 World War II messenger pigeons, three horses and one cat.

Training and serving together for two tours in Iraq, Lucca and her owner, Sgt Willingham, carried out numerous counter-insurgency and clearing operations.

In 2011, Lucca was sent to Afghanistan, leading 75 patrols in Helmand Province - an area heavily laden with improvised explosive devices.

With new handler Corporal Juan Rodriguez, Lucca worked at the front of the patrol, protecting troops behind her.

On the day of her injury, 23 March 2012, Lucca successfully discovered a weapons cache hidden under a haystack in a poppy field and alerted troops to a 14kg pressure plate IED, which was cleared.

But, after being sent to sniff out a nearby path, another pressure plate bomb detonated underneath Lucca, causing the immediate loss of her front left leg and severe burns to her chest, neck and head.

Cpl Rodriguez applied a tourniquet to Lucca's leg and bandaged her burns while a Medical Evacuation team was called. None of the soldiers in the patrol were injured in the blast and Lucca was evacuated from Afghanistan to complete her recovery.

Cpl Rodriguez stayed at her side throughout each move, sleeping next to Lucca as she recovered.

Within ten days of her injury, Lucca was up and walking.

Lucca, who retired from active service after her injury, now lives with Sgt Willingham and his family in California. 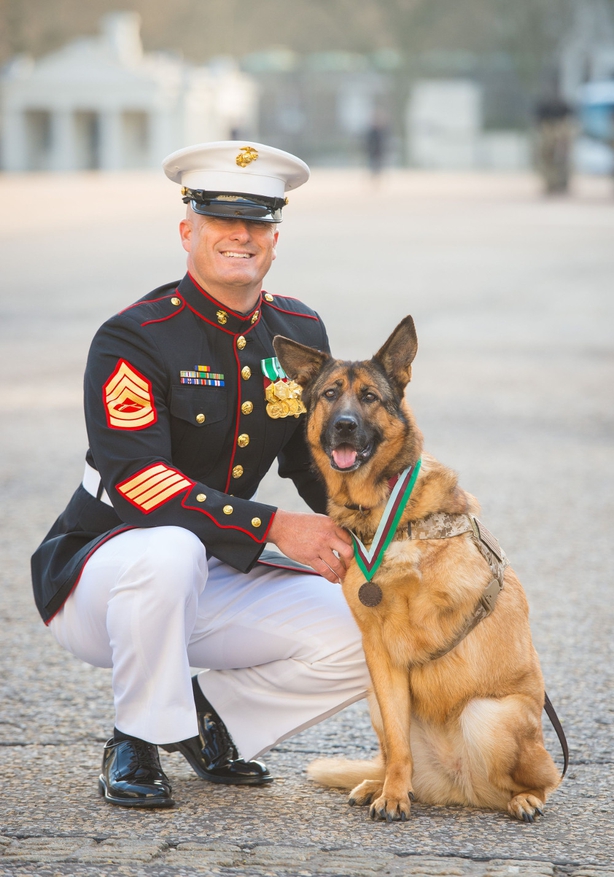