The self-styled Islamic State (IS) organisation which has claimed responsibility for last evening's terrorist attacks on Paris has been excoriated by a wide variety of Muslim religious leaders here.

But their statements reflect the deep sectarian divide in Islam between the Sunni and Saudi-led faction which, in common with IS, opposes the Syrian government and the Shia-led tendency which blames Saudi Arabia's leadership for spawning IS and its predecessors such as al-Qaeda.

The cleavage in Irish Islam widened significantly last week when two senior Sunni clergymen clashed on their assessments of the risk of Muslim youths being radicalised in Irish mosques.

RTÉ's Religious and Social Affairs Correspondent Joe Little has been reviewing the growing tensions in the leadership of a minority faith community in Ireland, which has been catapulted into the public spotlight by the latest outrages in Paris. 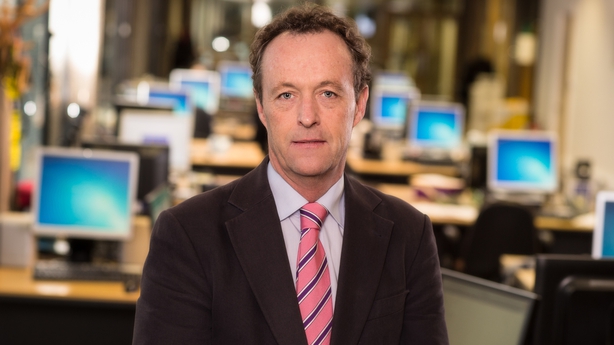 "ISIS represents a sick ideology and a misinterpretation of our religion," Shaykh  Umar Al-Qadri, Imam of the Sunni mosque in the west Dublin suburb of Blanchardstown, told RTÉ News.

The chairman of the Irish Muslim Peace & Integration Council said his thoughts and prayers are with the people of Paris "and every other place on earth plagued by sick men with weapons and bombs".

"The cancerous ideology of Daesh" - the Arabic word for IS – "can only be defeated with a collective approach by Muslim leadership and politicians," Dr Al-Qadri said.

Last week, he claimed that Irish Muslim children are being taught "hatred of other communities" at unregulated weekend religious classes.

Speaking on RTÉ’s News at One seven days before last night's atrocities, he said: The problem is "widespread" and that he has been approached by parents who are concerned their children are being taught beliefs that are "incompatible with real Islamic teaching".

Dr Al-Qadri said the majority of Irish mosques do not conduct proper checks when hiring teachers who are only required to be able to recite the Koran and give their time, often as volunteers. And he called for safeguards to be put in place.

He proposed that the Department of Education might facilitate meetings of mosques and Muslim communities which would develop a standard syllabus.

But the Islamic Cultural Centre of Ireland (ICCI) immediately dismissed the call, saying young Muslims here are neither vulnerable to nor falling prey to radicalisation.

The ICCI's spokesman, Dr Ali Selim told RTÉ News young Irish Muslims "have not been entertaining the ideas IS has been trying to sell them" on the internet, for example.

Today Dr Selim issued a statement on behalf of the Sunni Irish Council of Imams unequivocally condemning what it called "the atrocities" in Paris.

The council said it was "in full conformity with Islamic teachings when condemning terrorism of all kinds, regardless of the perpetrators' race and faith".

But the statement was unique among today's Irish Muslim commentary because it went on to condemn what it called "state terrorism" as well as extremist groups and individual terrorists.

Asked by RTÉ News to explain this, Dr Selim singled out President Bashar al-Assad's Syrian government as the most notorious of today's state terrorists.

However, condemning IS - which is to the forefront of the four-year-long war to topple Mr Assad’s regime - Dr Selim said the "crimes in Paris can by no means be classified as a just struggle".

He endorsed today's appeal from the European Council for Fatwa and Research urging "the entire world to live in peace, respect human rights and shun violence and create a just society where atrocities like these cannot flourish".

The Clonskeagh-based Islamic Cultural Centre also issued a statement in the name of 16 Muslim organisations here describing the attacks as "crimes against humanity which could not be justified in any circumstances".

The Irish Council of Imams dissociated both their faith and their fellow Muslims from the perpetrators of "such violent and brutal acts".

Meanwhile, the leader of the Shia Muslim community here said it is shocked, saddened and horrified by last night’s terrorist attacks.

Dr Ali Al Saleh extended his sympathy to the people of France and blamed the government of Saudi Arabia for funding IS and spreading the ideology underpinning it.

Imam Al Saleh, who is the founder of the Hussaini Mosque at Milltown in Dublin, also extended condolences to the relatives of 43 people killed by IS in a Shia area of Beirut on Thursday.

He said the double suicide-bomb attack in the busy residential and commercial district of Borj al-Barajneh exposed the second face of the terrorist movement, namely sectarianism.

He said such sectarian attacks were a daily occurrence in the Baghdad and that 20 people had died yesterday alone in two separate explosions in a Shia district of the Iraqi capital.

Dr Al Saleh said the sectarian attacks inside predominantly Muslim societies and the international terrorist attacks on the west would continue unless pressure is put on the Saudi government to end its support for Daesh, as IS is known in Arabic.

"Saudi Arabia has been sponsoring this Wahabi ideology since 1979 when resistance to the Soviet invasion of Afghanistan began," the Imam said.

Wahabi refers to the variation of Islam practiced by the Saudi royal family and their followers.

"Some people who fought against the Soviets in Afghanistan are now fighting in Syria as well as waging war on the internet. You can read their praise for the Paris attacks and for the killing of Shia Muslims on social media," he said.

Dr Al Saleh says that the Shias are a 4,500-stong minority in the Republic of Ireland's Muslim community.

Both the Islamic Cultural Centre and Shaykh Umar Al-Qadri adhere to the Sunni sect of Islam.