For a century or more Skid Row in Los Angeles has been the refuge for those who cannot fall any lower, the "capital" of homeless in the United States.

And despite a litany of aid programmes, the latest of which was launched yesterday, nothing much has changed in the LA district.

A woman walks down the middle of the street, just avoiding being hit by a car.

Men emerge from tents pitched on the pavement, some in rags, others pushing carts full of their meagre possessions.

A painted mural sums it up: "Skid Row. Population: Too Many." 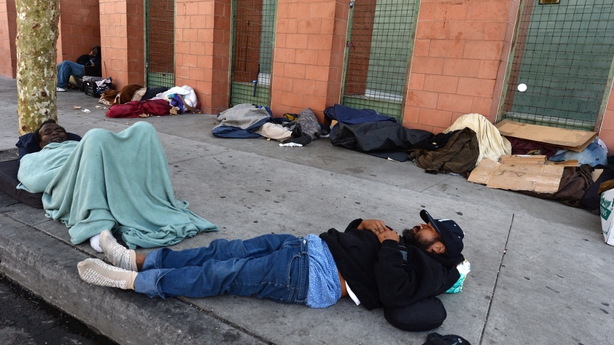 The vast majority are alcoholics, drug addicts or are physically or mentally disabled.

"Whenever I leave my spot and try to do some work, and I come back, my place has been ripped off. They stole all my tents," said Chesterlas Nelson Jr, a singer who goes by the nickname of "the artist."

Another Skid Row resident, Eunice Carr V, said he and his had been randomly beaten, adding that the district is dangerous even in daylight.

"People right here on Skid Row don't have clean water, don't have a place to go and use the bathroom, don't have a trash can," added General Dogon of the group LA Community Action Network, who himself used to be homeless.

There's a paradox in the City of Angels. 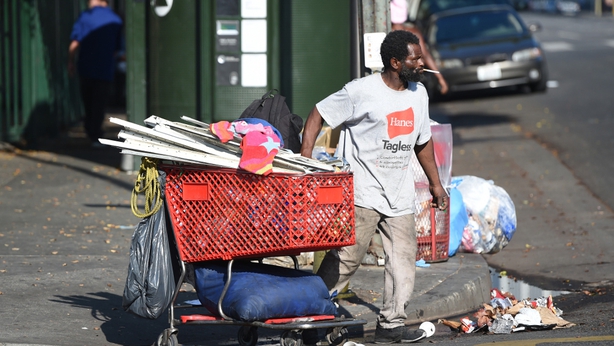 "We have the most millionaires, the most mansions, but also the most acute poverty in the country," said Gary Blasi, a law professor at the University of California Los Angeles.

"Since the 70s the city adopted a policy called containment," he added, explaining that the homeless cause less of a disturbance among the warehouses of Skid Row than in residential districts.

The story of an old woman wandering around in a hospital gown, or a paraplegic left in the dirt on a footpath caused a nationwide scandal, and lawsuits against two local hospitals accused of dumping patients on the street.

"Arizona puts them on the bus and sends them to California. It is documented," said Herb Smith, director of the LA Mission which caters for a large number of the district's homeless.

"Mental institutions discharging people in Skid Row. It's a known location," he added, lamenting a rise in violence, including against his staff, in the last few years.

Despite a long list of rehabilitation programmes - the latest of which, Plan for Hope, was presented at LA's City Hall - the district is constantly repopulated with new homeless people. 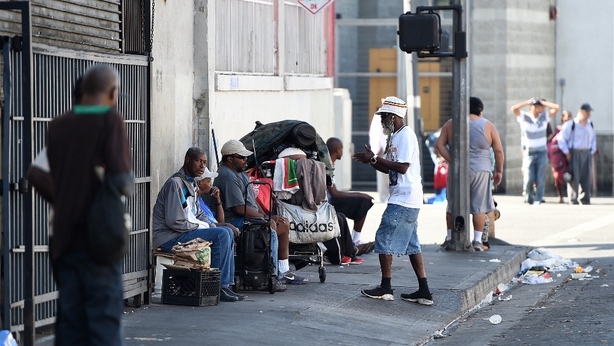 For its inhabitants, Skid Row has some good sides compared to other areas of the city, where there is no infrastructure for them. "We eat every day!" said Eunice Carr V, who has lived here with his wife for 15 years.

They can also benefit from programmes aimed at helping them get back into the workforce and other types of help, most of it privately financed by charity groups.

But above all, everyone here wants somewhere proper to live.

"The likelihood that you will go in the Emergency Room goes up 500% if you're living on the streets," said Blasi.

"So from a a public policy and economic point of view it's much cheaper to provide them with housing than with really expensive health care. You can easily spend $5,000 a day in the ER, and that's enough to house someone for two years," he added.

According to groups helping those in Skid Row, municipal aid amounts basically to providing police, who are often accused of harassing the homeless.

They say what might really change the appearance of Skid Row would be economic pressure of real estate prices, in a district only a few blocks away from parts of LA where prices for lofts have gone through the roof.