Twenty-nine days of fighting between Israel and Hamas broke out on 8 July and expanded with an Israeli ground assault nine days later.

Talks are continuing to extend a 72-hour truce which began on Tuesday morning and is due to expire on Friday at 9.00am Irish-time.

Here is a summary of the chief statistics at the outset of the 72-hour ceasefire:

- In Gaza, 1,886 Palestinians were killed and more than 9,560 wounded since the start of the Israeli offensive, according to the health ministry.

Figures released by the UN humanitarian agency OCHA, which were correct at 9.00am on 6 August, gave a total of 1,843 dead Palestinians.

Of those whose identities have been verified, 1,354 were civilians, or 73%, OCHA said. This number includes 415 children and 214 women.

OCHA says 216 dead Palestinians have been identified as members of armed groups.

- In Israel, 64 soldiers were killed after the ground offensive began on July 17. Most died in fighting in Gaza but others were killed by militants who infiltrated southern Israel.

Israel's military losses are the heaviest since the Jewish state's 2006 war against Hezbollah in Lebanon.

The army does not disclose the number of soldiers admitted to hospitals.

It is unclear how many people are still staying with host families or sheltering in government schools.

According to army figures, militants fired 3,360 rockets, of which 2,650 hit Israel while another 578 were intercepted by its Iron Dome anti-missile defences.

Israel says it struck 4,760 targets across the Gaza Strip.

The army said it destroyed over 3,000 rockets, and razed 32 cross-border tunnels used by militants to attack Israel.

OCHA says alternative housing will be needed for around 65,000 people whose homes have been destroyed.

At least 153 schools in Gaza, including 90 run by the UN, were damaged by Israeli air strikes or shelling, the UN children's fund UNICEF says.

One Palestinian government school was used by Israeli forces as a base. 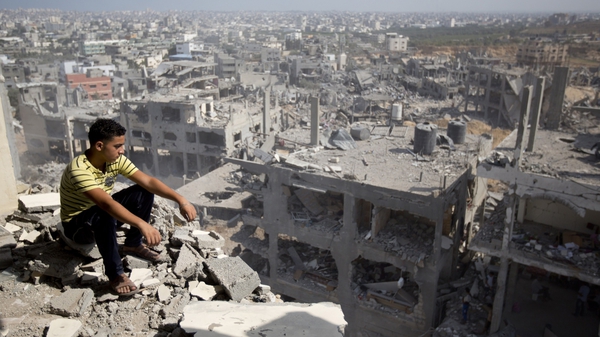