It's an unassuming street in downtown Tehran. Security is visible but, after all, this is the capital's diplomatic district. The well-heeled passers-by don't pay much attention.

But to Irish eyes the road stands-out because it's named after Bobby Sands, the Provisional IRA member who died in 1981, aged 27, after 66 days on hunger strike.

At that time, Ayatollah Khomeini had been in power for only two years.

Streets which had been associated with the deposed Shah were being re-named across the capital.

A group of young teenagers had a radical idea after reading about what was happening in the Maze Prison: change Winston Churchill Street to Bobby Sands Street.

The plan might not have been that controversial had the British Embassy not been located on the street.

The signage is a little strange - the name is spelt phonetically - Babi Sandz St.

A fast-food restaurant was also named after him, which is a bit weird given how Bobby Sands died.

More than three decades after Sands' death, the Sinn Féin TD Sean Crowe visited Tehran this week as part of a delegation from the Oireachtas Joint Committee on Foreign Affairs and Trade.

Crowe said: "It was very much appreciated - the Iranian position on the hunger strike - by Irish republicans and nationalists."

Crowe slipped him a copy of Sands' writings, something he did at every meeting with Iranian officials.

Deputy Crowe suggests that Sands is 'probably the most famous Irishman in Iran... because of the sacrifice he went through at the time, which struck a cord with people."

If anecdotal evidence is anything to go by, this might be true.

Maureen O'Sullivan, the Independent Deputy from Dublin Central, said she got chatting to an Iranian man on the plane to Tehran.

Once she declared she was Irish, he replied: "Ah, Bobby Sands!"

The British government was outraged that a person convicted of a terrorist offence - the possession of a weapon - was being honoured.

To ensure letters to the embassy didn't have to use Sands' name, they sealed their main entrance on the street.

Officials then broke down a wall at the side of their compound, and so their address changed to Ferdowdsi Avenue.

Jack Straw, who visited Iran last week, had lobbied the Iranian government during his time as Britain's Foreign Secretary, for Bobby Sands Street to be re-named.

Commemoration of those who were 'martyred' for their cause is commonplace here.

On a stroll around Tehran you see numerous pictures, murals and posters of soldiers who died in the Iran - Iraq war of the 1980s.

But do Iranians know who Bobby Sands was?

Most of the people I spoke to on the streets were neither aware of who he was nor of the controversy surrounding the street name.

It was just another street. 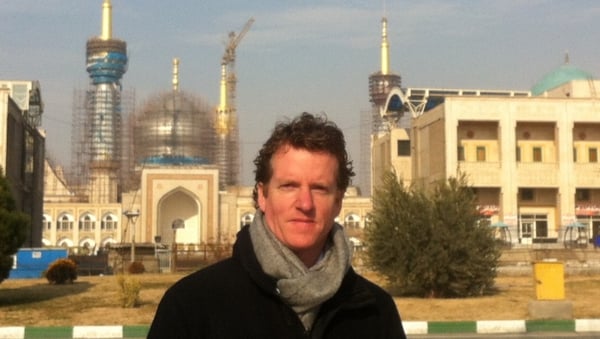