The arrival of an army of reporters, photographers and television crews for Nelson Mandela's funeral on Sunday has created a security nightmare for South African authorities - and the chance to make a quick buck for enterprising locals.

Police and soldiers have sealed off the centre of the anti-apartheid hero's ancestral village of Qunu, lying in rolling hills 700km south of Johannesburg, and banished media to a field on top of a hill a kilometre from the cemetery.

In accordance with the wishes of Mandela's family to keep the ceremony private, the only pictures of the burial of one of the 20th century's greatest figures will be via the SABC state broadcaster and an official outside photographer.

In the skies above the village, fighter jets are enforcing a no-fly zone, both for the security of imminent high profile arrivals such as Britain's Prince Charles, and to prevent any prying eyes observing the rites from a passing helicopter.

A huge marquee erected on a hillside for mourning family members, tribal elders, top government figures and official guests blocks the view of nearly all of the family plot where three of Mandela's children are already buried.

That is not likely to deter photographers with long lenses from sneaking the last shot of South Africa's first black leader, as his coffin is lowered into the ground at the end of funerary rites expected to mix Xhosa tradition with military pomp and ceremony.

Armed patrols are scouring nearby hilltops and have already intercepted photographers scouting out vantage points offering any view of the graveside or mourners.

"If you have any access to private moments of the family, you will be removed," government spokeswoman Neo Momodu told a news conference.

Not everybody is unhappy about the descent of hundreds of reporters, TV anchors and crew members, generator technicians and satellite engineers on Qunu, a village of just a few hundred houses dotted across open fields.

Shortly after the announcement of Mandela's death on 5 December at the age of 95, bed-and-breakfast owners in and around Qunu formed an ad hoc cartel, jacking up room rates by as much as three times.

Roadside hawkers are also doing a roaring trade, catering for media men and women as well as security guards and curious on-lookers forced to take a detour off the main road linking the coastal cities of East London and Durban.

"We're self-employed. We've got to get by somehow," said Anna Kinana, manning a road-side stand selling hot dogs and grilled chicken with her sister.

"We're grieving in Qunu. We're in mourning. But we wanted to help out," said soft-drink seller Anelisiwe Mqungu.

The weather forecast for Sunday's open-air ceremony is for intermittent sunshine, a considerable improvement on the last few days of low cloud and driving rain - a sign of good fortune in Xhosa culture but a nightmare for media bosses, who are now praying Qunu's notoriously fickle weather holds.

On Tuesday, an all-day downpour disrupted a mass memorial in Johannesburg and the following day blanket fog in Qunu threatened to make a mockery of coverage plans drawn up over the last decade or more.

On Wednesday, with visibility reduced to no more than a few metres, live television positions set up with Mandela's home and the rolling hills of the Eastern Cape as a backdrop were instead treating viewers to an unadulterated sea of mist.

"All you could see was a wall of white," one reporter said.

"It was so thick you could hardly see your hand in front of your face, and you definitely couldn't see the Mandela house." 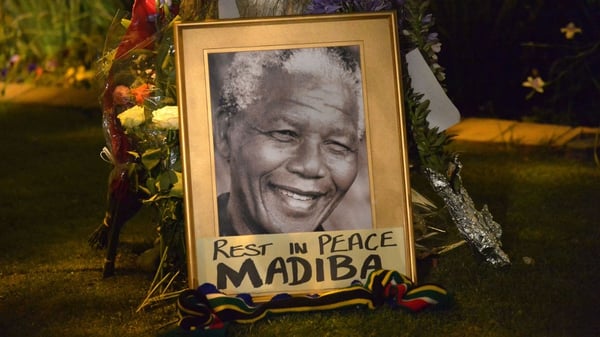 'A great light has been extinguished' - Death of Nelson Mandela