Apple's new iPhone 5 is selling well in Gaza despite inflated prices, reaching the Palestinian enclave via smuggling tunnels even before high-tech hub Israel next door.

The cutting edge smart phone is being snapped up for almost double what it costs in the United States, its price jacked up by middlemen on its circuitous delivery route from Dubai via tunnels linking the blockaded territory with Egypt.

The iPhone 5 will not be available until December from mobile operators in tech-mad Israel, which along with Egypt maintains a partial blockade of Gaza to prevent the entry of anything that could be used for military purposes.

But the phones have been available for a couple of weeks in Gaza and they were on display this week in three independent mobile stores in a one-block radius in downtown Gaza City.

"I ordered 30 and I've sold 20 so far," said one dealer. "We can order as many as we want. But most people are waiting for the price to go down. They're pretty expensive."

Apple has no store or official dealership in Gaza, whose Islamist Hamas leadership is in conflict with Israel.

Israel's Maariv newspaper last week reported that the iPhone 5's controversial new Apple Maps application does not list Jerusalem as the capital of Israel and its built-in World Clock app shows Jerusalem as a city without an associated country.

Israel regards Jerusalem as its undivided and eternal capital.

Palestinians claim East Jerusalem as the capital of the state they aspire to create in a peace deal with Israel.

For the 1.6 million Palestinians living in Gaza, transport and handling costs for all kinds of imports are inflated by bribes paid in Egypt to facilitate the smuggling, and Hamas adds sales tax at its end of the supply chain.

But despite the hefty mark-up and high costs in an aid-dependent territory with a crippled economy, market forces prevail.

"There are always some people prepared to pay whatever they must just to have the latest thing," a dealer said. 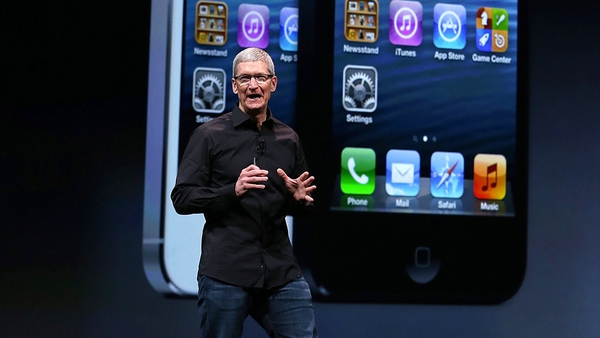