Richard Dowling looks at the history of Newgrange.

Civilisation and empires have come and gone. Many have left iconic landmarks to their existence - such as the temples built by the Maya or the Egyptian pyramids - but all of these were built long after this truly special place.

Although other passage tombs survive there is nowhere quite like Newgrange.

It was built over 5,000 years ago close to the river Boyne by Neolithic farmers and is one of the several passage tombs in the area – the others being Knowth and Dowth.

The Boyne Valley has been dubbed Ireland’s Valley of the Kings because of the huge number of archaeological sites in it, including the three passage tombs at the complex now known as Brú na Boinne (the bend in the Boyne), Tara, Loughcrew and the Hill of Ward.

It would have taken many decades to create Newgrange using material that came from all over the east coast of Ireland.

Some 200,000 tonnes of stone and earth were used in its construction. Boulders weighing several tonnes were probably excavated nearby and dragged up the hill to the site on logs.

It’s estimated it would have taken 300 people 20 years to build.

It is likely that fewer people were involved but it would, obviously, then have taken longer to build. Possibly several generations.

Some passage tombs like those on Loughcrew were built so the rising sun on certain times of the day will light up the inner chamber.

But the builders of Newgrange showed a level of sophistication that was truly remarkable.

The rising sun on the days surrounding the winter solstice – the longest night and the shortest day of the year – shines through a box built over the entrance to the chamber.

Just before 9am, the sun rises over the nearby hills and four minutes later a shaft of golden sun lights up the inner chamber.

When it was originally built, the light would have struck the back of the cruciform (built in the shape of a cross) chamber but due to changes in the earth’s axis over the millennia, the light now just reaches into the chamber and stops two metres short of the back recess.

The event lasts 17 minutes before the sun rises too high for the light to enter the chamber and everything is plunged back into darkness again for another year. 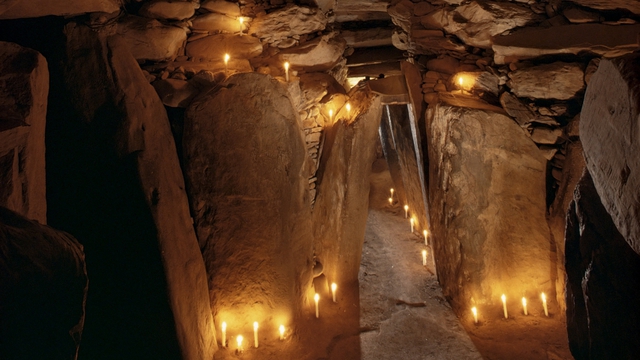 It thought to be a passage tomb and the remains (probably the bones or ashes) of individuals were deposited there after their death.

Given the scale of the building project, it is likely those whose remains were left here would have been very important to the society but no one knows who or why.

There are also a considerable number of Neolithic artworks carved into the stones at Newgrange but no one understands their meaning.

They are maybe linked to the solstice or they could have other meanings. As with many things about Newgrange, no one really knows. That knowledge was lost thousands of years ago.

Newgrange itself was ‘lost’ for several thousand years when it was covered with soil and grass.

It was then just one of several mounds near the Boyne River but through the millennia it never really lost its importance for religious ceremonies. There are 12 standing stones around the tomb and they marked it out as a place of significance. There may have been more standing stones that could have surrounded Newgrange but they disappeared over time.

Excavations also uncovered some Roman artefacts buried there, probably by Roman auxiliaries as a tribute - so it had significance for many people over many years.

The passage tomb was rediscovered in 1699 when material was being taken for a road building project.

It was not until 1962 that a full excavation of the site took place.

During this, thousands of pieces of brilliant white quartz were uncovered around the base of the tomb. During the ‘reconstruction’ phase they were put up around the front façade of the tomb where it is believed they once were.

Professor Michael J. O’Kelly was spent 13 years excavating and restoring the monument and is one of the people closely associated with Newgrange. It had been a tourist attraction since it was rediscovered but, acting on a hunch, he drove up from his home in Cork to be in the chamber for the winter solstice in December 1967.

Sometime earlier they had uncovered the lightbox over the entrance but no one knew what it was for. He sat for some time in the dark chamber but when the sun rose and lit up the chamber he became the first human for thousands of years to see what it was all for.

It was an event that would change him and Newgrange forever.

It is not known why the builders of Newgrange aligned it to the winter equinox, but given the time and effort it took to achieve it must have been an important reason.

The sunlight illuminates the chamber of several mornings surrounding the equinox (18 December to 23 December) but December 21st is the solar equinox and when most people gather at Newgrange.

On the morning, the sun rises at 8.52am over the hills at the far side of the river. Four minutes later the first light hits the chamber through the lightbox. At first it is a narrow beam but then widens out. After 17 minutes the light disappears entirely from the chamber as the sun rises.

Several hundred people gather outside the chamber at the solstice for a variety of reasons. Some to welcome the start of a new astronomical year, others to commune with the spirit world, others just to enjoy the occasion.

Most of those lucky enough to be in the chamber for the solstice had their names drawn out by school children in the annual draw.

People can enter this draw when they visit the Bru na Boinne visitor centre and this year there were 25,345 applications. 50 names are drawn from all over the world so they and a friend can enter the Chamber during the days of the solstice.

But whether we actually see the sunrise - well that really depends on the sun gods and whether they want to shine on us.

RTÉ had numerous cameras at Newgrange for the event on Tuesday. There was one camera inside the chamber to witness what this monument was created for.

There was a second camera positioned elsewhere in the chamber while a third camera captured the scene outside, including the sun rising over the hills and the reaction of the assembled crowd.

Only a handful of humans have ever seen the sunrise from inside the chamber at Newgrange. 21 December 2010 was not one of those days.