Two river rescue robots are being deployed in Athlone in an attempt to save more lives.

The robotic life buoys can be thrown into the river in the event that a person enters the water. The robots can then be operated by remote control from the banks of the river.

A multi-agency training exercise involving gardaí, the RNLI and the Athlone Sub-Aqua club took place on the River Shannon today.

The midlands town is the first in the country to start using the robotic lifebuoys.

It is hoped that the hi-tech devices will be able to give rescuers a head start as they await the arrival of the RNLI from outside the town.

Gardaí from the nearby Athlone Garda Station are the first to be trained up to use the new equipment.

Sergeant Paul Kelly said the eventual goal is to have every guard in the town trained to use the robots.

"We are so often the first responders, so it will give members of the public a better chance when we arrive here and we have the equipment."

Hi-tech remote-controlled river rescue robots are being deployed on the Shannon in Athlone in an attempt to save more lives- full story on @rtenews 6.1 later pic.twitter.com/ZF61LZxl2h

He said there have been a number of incidents on the river in recent months.

"It could go a few months without anything, but then we could have two or three in a single month. We have had two or three incidents in the last month alone. We've had good outcomes but a lot of times there isn't a good outcome, so this just gives us a far better fighting chance," he said. 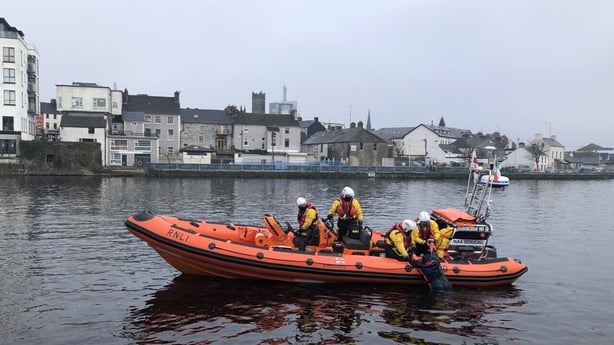 The devices were purchased using money raised by the Athlone River Safety Awareness group that was set up in 2019.

Its chairman, Cllr Aengus O’Rourke, said that up to now, anyone who entered the water had a poor chance of survival.

Cllr O’Rourke said the group considered other methods to save lives on the Shannon like jet skis and canoes, but these methods all involved putting other people into the water, whereas these robots are remote controlled from the river's edge.

Lough Ree RNLI is stationed in Coosan Point just outside the town, however, it is 15 minutes away from the town centre.

"That’s the gap we want to fill. If you’re in the water here on a winter's day or any day, 15 minutes is a long time and with the flow of the River Shannon you’d be long gone. We fill that gap," said Cllr O’Rourke.

The exercise was assisted by members of Athlone’s sub-aqua club, which is often involved in recovery operations on the Shannon.

"For too long we’ve had too many recoveries in the Shannon and we’re trying to get more rescues," said Jude Kilmartin from the club.

The robots will be located in yellow boxes on either side of the river, which also contain other life-saving equipment.

Mr Kilmartin said that those trained to use the gear will have codes to the boxes, but in an emergency, members of the public should ring the coastguard on 999 or 112.

Athlone River Safety Awareness is hoping to recruit at least another 30 volunteers to train them in how to use these vital lifesavers.