An Post is set to issue two new stamps to mark the visit of Pope Francis to Ireland for the Catholic World Meeting of Families (WMOF) in August.

Some 500,000 €1 stamps will be printed carrying an image of Pope Francis with a dove taking flight and over 100,000 (€1.50 international) stamps, which feature a family walking together on a beach, will also be available. 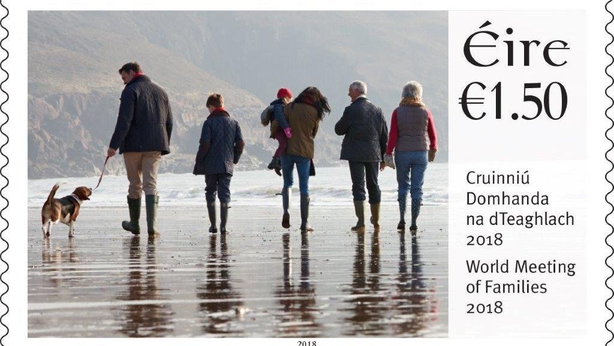 The stamps and related stamp product are designed by Dublin-based Vermillion Design.

The stamps will be on sale in selected post offices nationwide from tomorrow (July 26th).

Specially designed First Day Covers, stamp miniature sheets and souvenir sheets will also be available from the stamp counters at Dublin's GPO and online at www.irishstamps.ie.

Speaking at the unveiling of the stamps Archbishop Diarmuid Martin said the stamps were a fitting tribute to what he hoped would be ''a memorable and uplifting visit of Pope Francis to the World Meeting of Families in Ireland - a visit that presents a great opportunity for the Church and the country".

Pope Francis will visit Ireland on 25 and 26 August where he will attend the WMOF in Dublin's Croke Park and will celebrate the closing mass of the gathering at the Phoenix Park. He will also recite the Angelus prayer at Knock's main Marian Shrine.

The pontiff will be welcomed by President Michael D Higgins at Áras an Uachtaráin when he arrives in Ireland.

He will also visit Dublin Castle and the Pro-Cathedral, before a private visit to the Capuchin Day Centre for Homeless Families.

He is expected at Croke Park at 7.30pm where the WMOF is being held.

On Sunday 26 August, Pope Francis will travel by plane to Knock for the short visit there before returning to Dublin where he will celebrate mass in the Phoenix Park at 3pm.