A levy on disposable coffee cups will be introduced in the coming months in an effort by the Government to cut their use.

The Circular Economy Bill published this morning is aimed at reducing waste and influencing behaviour.

It also paves the way for use of CCTV to detect and deter illegal dumping and littering.

The bill will introduce mandatory segregation of waste and an incentivised charging regime for commercial waste, similar to what exists for the household market.

Minister of State with responsibility for Communications and the new Circular Economy Ossian Smyth told RTÉ's Morning Ireland that approval will be needed from the European Union for the change.

It will take a few months before it will become law as the EU wants to ensure Ireland is not interfering in the single market, he said.

He said he is "hoping not to collect money from this levy. I am hoping that there will be such a reduction that in fact most people will switch over."

The levy will be 20 cent to start, he explained.

Mr Smyth said the use of keep cups dwindled during the pandemic but public health advice is that they are safe to use, so there should be no concerns about spreading Covid-19 and using reusable cups.

The Circular Economy is "the difference between the way we have run our society up to now, which is to dig things out of the ground, make them into something, use them up and then dispose and burn them or put them into landfills. So that's the linear economy.

"And instead, we want to make sure that the waste that we produce in society is considered to be a resource and feeds back into the rest of the economy so that we're not throwing away things", he said.

Mr Smyth said that one of the reasons for the levy is "not just for climate action, but also it makes us more independent and self-sufficient as a nation.

"So, we're not dependent on imports of raw materials to run our society".

In future all businesses will have to segregate waste as is the case with household rubbish "so there isn't a free pass to not to segregate your waste".

He said the use of CCTV will be used by councils to monitor dumping.

This is a necessary change in the law as there were issues around privacy laws and data protection before now, "it’s absolutely needed", he said.

Many cafes have begun accepting reusable coffee cups again, and some – such as Grove Road Cafe in Rathmines, Dublin – are incentivising their use.

The cafe offers a 20c discount to customers who bring their own cup for takeaway coffee. It is also preparing to take part in the '2GoCup' deposit and return scheme, which will see customers able to pay a €1 deposit for a cup that they can return or swop for a new one at participating coffee shops.

"I think it's good, it's like the plastic bag levy," she told RTÉ News.

"People just need to change their behaviour. They will when they have to, when it costs them money.

"The (disposable) cups, a lot of them are recyclable but they end up in landfill."

The Restaurants Association of Ireland has said it has some concerns about the proposal and wants to know more.

"We would like to have consultation with the Minister around the practicalities of implementing this new levy," CEO Adrian Cummins said.

"And also from a food safety point of view, that there is comfort there for coffee shop and restaurant owners." 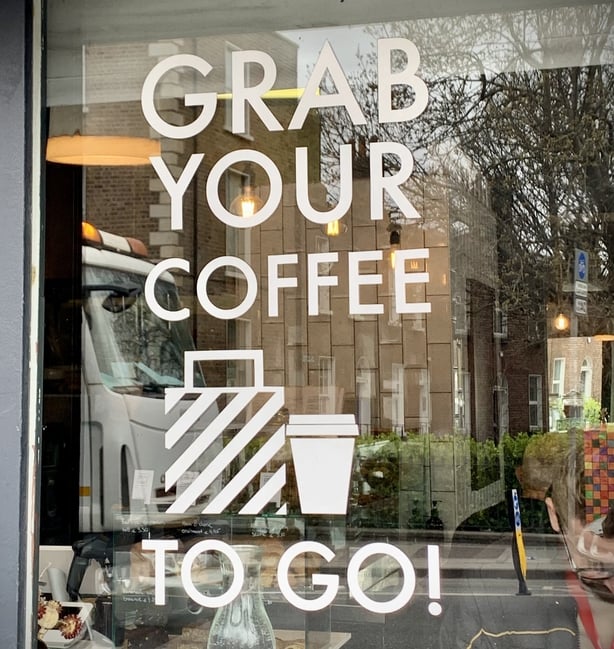