Legislation to facilitate the establishment of a gambling regulator has been published by the Government.

It seeks to replace an "outdated, fragmented" legal framework that currently underpins the sector, Minister of State at the Department of Justice, James Browne explained.

The gambling sector has seen significant growth over the past 10 years, facilitated by online gambling and technological developments. The industry is worth an estimated €6-€10 billion.

The legislation would ban credit card betting, free bets and services such as VIP or preferential treatment.

It would also end the practice of offering credit facilities to players and will prohibit children from engaging in any form of gambling.

A social impact fund would be established to fund education and research as well as treatment services for problem gamblers.

Gamblers may also place themselves on a self-exclusion register to prevent them from placing bets.

All of this will be overseen by the Gambling Regulatory Authority of Ireland.

However, the authority cannot be established until the legislation underpinning it has been passed by the Oireachtas.

A CEO designate of the authority will be appointed early next year, to help establish it so that it is ready to operate once legislation is passed.

However, he said that he was worried about the amount of time it might take for the legislation to be passed and ultimately for the regulator to begin its work.

In the interim, Prof O'Gara believes the Government should legislate in specific areas such as mandatory deposit limits and the banning of gambling advertising.

He believes that gambling addiction should be treated as a public health crisis which he warned is currently affecting people and families in "a very detrimental way".

Prof O'Gara believes the social impact fund could be established before the overall legislation is passed.

"It's imperative that treatment for patients and families via the industry come as quickly as possible. A pertinent question would be - is it possible for Government to legislate in advance of the regulator for the establishment of a social fund to facilitate treatments?" he said.

Once established, the Gambling Regulatory Authority of Ireland will have the power to withdraw licences and close down businesses.

It can also impose fines of up to €20 million or 10% of a gambling provider's turnover, whichever is greater.

The growth in the gambling sector has been accompanied by a significant rise in problem gambling.

It's believed that there are approximately 55,000 problem gamblers and while the majority are men "more and more" women are affected, Minister Browne explained.

He said that it is often an addiction that is hard for friends and family to identify.

"Very often the first [time] family or friends know about a gambling addiction is when a sheriff calls to the door or when the gardaí call to the door or even worse", Mr Browne said.

He pointed out that there had once been considerable concern over the proposed development of a casino in Co Tipperary a number of years ago.

The "Tipperary Venue" was set to be a Las Vegas style casino, with a replica of the White House to be included in the development.

However, today "every 10 or 12-year-old is going around with a casino on their phones in their back pockets", Mr Browne said. 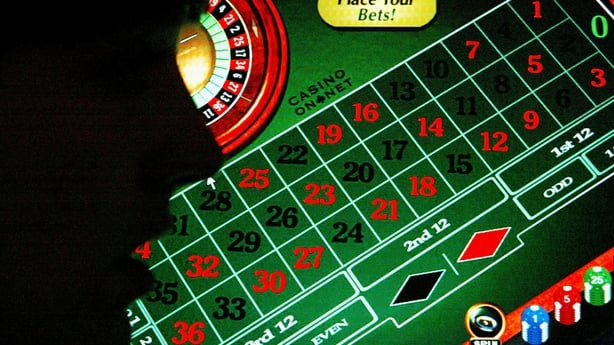 Extern Problem Gambling welcomed the legislation but said there were a number of other measures that the Government could explore.

On RTÉ's Drivetime, CEO Barry Grant said introducing a function to limit the length of time that a person can spend gambling online is an additional measure that could be considered.

"In Germany where they recently legalised online gambling, they have a function there for limiting the amount of time that a person would spend gambling online.

"It's a big issue and it's usually a strong indicator that somebody has a problem especially if they're gambling through the night or late at night.

"There's also other measures that could be taken such as slowing down, online casino games, things like slot machines, online roulette, things like that but I suppose there's a lot of broad brushstroke stuff in here.

"We will be making a submission with more details around that type of thing but generally speaking, there's a lot of very progressive measures here."

He said that the original 2013 bill had "been gathering dust for quite a long time" and while it was "quite progressive and had a lot of forward thinking measures in it" a lot of things have happened in the world of technology and gambling since then.

Mr Grant said the proposal for an "opt-in" service for gambling ads in video sharing platforms like YouTube is a "big issue".

"We know that a lot of children are being exposed to gambling ads on those types of platforms at the moment."