Taoiseach Micheál Martin has said he had a good and warm discussion this morning with European Commission President Ursula von der Leyen in relation to the appointment of a new EU Commissioner.

Mr Martin said he had no contact with her prior to yesterday's decision by Phil Hogan to resign as EU Trade Commissioner, and said she accepted that at no time did he seek to influence her deliberations on this matter.

He said they noted the distinguished service Mr Hogan has given to Ireland and to Europe.

The Taoiseach said Ms von der Leyen "fully understands the sense and the background to all of this" and that Mr Hogan made the correct decision.

Taoiseach Micheál Martin says he had a good and warm discussion this morning with European Commission President Ursula von der Leyen in relation to the appointment of a new EU Commissioner | Read: https://t.co/gmIg2KhOjS pic.twitter.com/2QPRFqtgb0

Ms von der Leyen will be writing to the Taoiseach this evening in relation to beginning the search for a successor.

Mr Martin said the three government party leaders will meet to discuss this and the shared objective is to nominate a person of "a very, very high calibre" and they will respond to her request to nominate a man and a woman.

He said he did not seek to influence Ms von der Leyen about Ireland retaining the trade portfolio, but had indicated the overall situation in relation to Ireland's agenda.

He said "we are very conscious of pressing issues", but the decision remains within the competence of the President herself.

Mr Martin said the conversation focused more on the nomination process and how a person of calibre would be chosen to succeed Mr Hogan.

Fine Gael leader Leo Varadkar said he intends to continue to lead his party and to work hard in his role as Tánaiste and Minister for Enterprise, Trade and Employment before becoming Taoiseach again in 2022.

When asked if he would be interested in the European Commission job, Tánaiste Leo Varadkar says his intention is to lead his party, work hard in his current job and become Taoiseach again in 2022. | Read: https://t.co/gmIg2KhOjS pic.twitter.com/inRRZAepDm

He was responding to reporters in Limerick who asked if he would put himself forward as EU Commissioner.

Minister Varadkar said Mr Hogan is "a good colleague and a very good friend" and someone he had re-appointed as commissioner as he did such a good job in his last role.

"But the situation developed as it did. He was given an opportunity to explain his whereabouts, his movements within Ireland and to confirm that he had been following the public health guidelines.

"But unfortunately over a period of days it had transpired that he had not.

"But ultimately this is a decision which was made by President Von der Leyen, not one by the Irish government. I think it was the right decision in the end. But...lots of regrets."

Tánaiste Leo Varadkar says the resignation of Phil Hogan is regrettable but it was the right decision. | Read: https://t.co/gmIg2KhOjS pic.twitter.com/odRSTKi23m

Mr Varadkar said while there is a distinction between private citizens and public representatives, he hopes the events of the last couple of days in some way demonstrate that Ireland is a country where the rules, the laws, standards and guidelines apply to everyone equally.

He said these events shook people's confidence and faith in the public health message that they are being asked to follow and adhere to.

The Tánaiste said he hopes they could strengthen people's resolve in tackling the virus as "we are in this for the long haul".

Meanwhile a Sinn Féin TD has said Mr Hogan did the right thing by resigning and that his position had become untenable.

The party's spokesperson on children and youth affairs, Kathleen Funchion, said Mr Hogan had lost credibility and people were rightly angered as they had made massive sacrifices.

Asked who should replace him as Ireland's EU Commissioner, she said she did not know but said there were not enough women at that level. 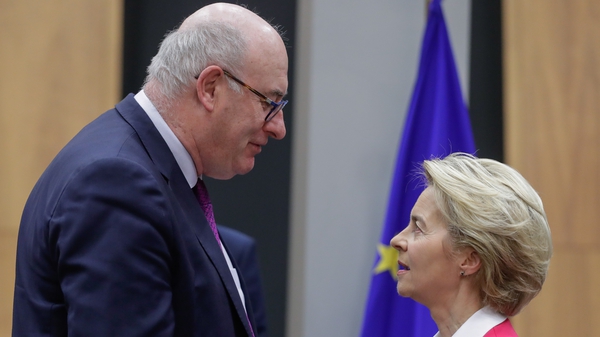