The Government has announced that gatherings in homes are to be limited to a maximum of 10 people from no more than four other households to help prevent a resurgence of the spread of Covid-19.

The Taoiseach announced this evening that Ireland will not progress to Phase 4 of the roadmap on reopening as planned next week.

Micheál Martin said that Cabinet has agreed that current health measures on Covid-19 should remain in place until 10 August.

The Government said regulations on face coverings in the retail sector will take some time to draft but that the strong advice is for people to start obeying the guidance immediately.

The Acting Chief Medical Officer at the Department of Health, Dr Ronan Glynn, said that the reproductive rate of the coronavirus, the R number, in Ireland is now between 1.2 and 1.8.

He warned the public that the pandemic is not over, and that it is accelerating globally.

Dr Glynn said efforts must now be redoubled to suppress the virus, and that it remains active in communities in Ireland.

The Taoiseach said the priority now must be on getting the R number below one. If that happens it gives the country the best chance possible to get schools reopened in late August, he said.

Mr Martin told the conference that it is also vital to ensure that critical non-Covid care continues.

The Taoiseach said that the roadmap on reopening Ireland made it clear that each phase and indicative date for them would be kept under constant review.

"One thing has not changed - this virus has not changed," he said. "Indiscriminate in its cruelty and relentless as ever in finding new hosts so it can continue to spread."

Mr Martin said that the Government will publish a so called 'green list' of countries on 20 July and said the list will be kept under review every fortnight.

There is to be an increased presence of staff at ports and airports to make incoming passengers aware of their obligations including restriction of movement for 14 days.

Work is under way to move the passenger locator form online to make it easier to do follow-ups.

Mr Martin said he knows that for a lot of people the delay to Phase 4 will be disappointing. However, he said it is important to protect the progress made to date.

Minister for Health Stephen Donnelly said the success so far is down to collective effort, and that Ireland has one of the lowest prevalences of Covid-19 in Europe.

The Government said it was asking everyone to be careful and to remain cautious, saying the aim is to prevent a resurgence of Covid-19 and to protect the most vulnerable.

Dr Glynn said that in recent days NPHET has had a growing concern in the increase in Covid-19 cases and the profile of cases.

There is an increasing proportion of younger people testing positive and a number of those were linked to large clusters, he said.

NPHET is recommending that a cautious approach be pursued.

Earlier it was revealed that there had been an increase in the number of clusters of Covid-19 in private households, particularly in the last week.

The number of clusters or outbreaks of Covid-19 reported in private households increased by 96, in the week to last Sunday, according to the latest figures from the Health Protection Surveillance Centre. 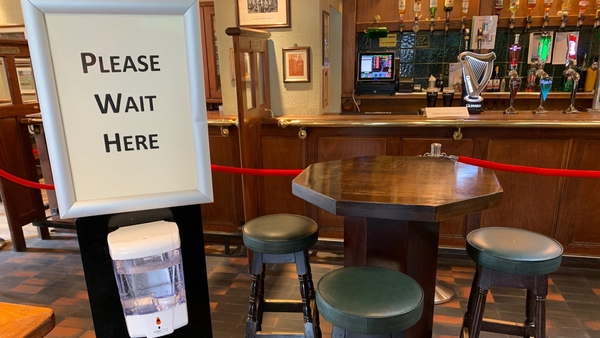