President Michael D Higgins' planned visits to two of the Irish outposts situated on the border between Lebanon and Israel were cancelled this morning due to reports of violent protests in the region.

It is understood the demonstrations are over new austerity measures being introduced by the Lebanese government.

The President did, however, visit the Irish Battalion headquarters in At Tiri wher he met soldiers of the 114th Infantry Battalion.

Shortly before midday, he arrived at the base in At Tiri by helicopter, where he was greeted by a guard of honour and the battalion's pipe band.

Lieutenant Colonel Paul Kelly briefed the President on the Irish operation in south Lebanon and outlined some of the continuing challenges the battalion face, as well as the progress it is making as it attempts to maintain peace along the Lebanese-Israeli border. 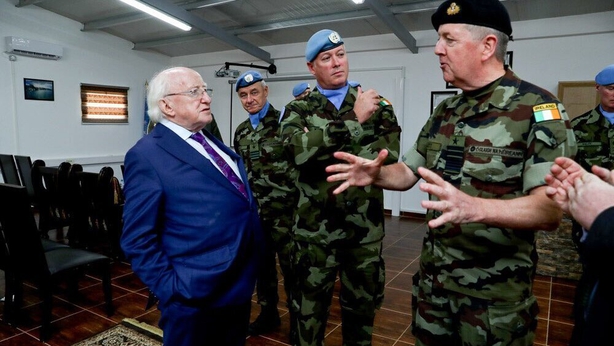 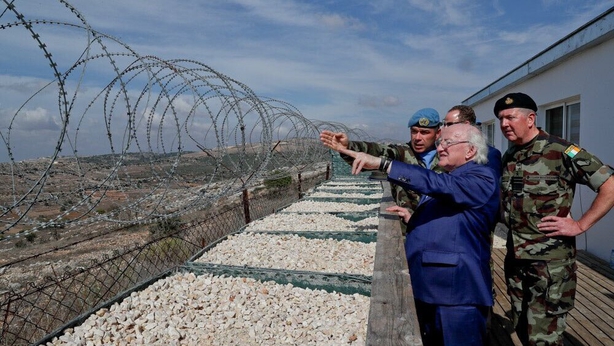 President Higgins also met a delegation of 17 local mayors, representing the villages and towns in the region patrolled by Irish soldiers.

He thanked them for the enrichment the Lebanese people gift to the Irish soldiers through the "great friendship and beautiful culture they so kindly share with our troops.

"I hope the day will come when you will no longer need our young men and women here and that you will achieve security and peace with your neighbours".

The President then met the soldiers, praising them for their efforts in maintaining peace in Lebanon and said their courageous work would leave a lasting legacy for the people of the country.

He specifically highlighted the growing involvement of women in the Defence Forces.

The current Irish deployment of 460 has 28 women in the ranks. The President said he hoped that female participation continues to grow.

President Higgins said the Irish involvement in south Lebanon was a matter of great pride for him, as is the respect with which the Irish are held by the Lebanese people.

He paid tribute to all of the soldiers who have served in Lebanon in the past and said the great sacrifice of the 46 men and women killed while on duty in the country would never be forgotten.

The President also recognised the "emotional challenge" of serving on foreign soil and he paid tribute to the families, relatives and friends who they leave behind. He acknowledged the great sacrifices for all involved.

President Higgins is in Southern #Lebanon, to meet the Irish troops serving in the United Nations Interim Force in Lebanon (@UNIFIL_). https://t.co/NkMKbT4HDS pic.twitter.com/mdk4UAN95l

Earlier, Colonel Ian Byrne, Deputy Commander of the Sector West United Nations Interim Force in Lebanon (UNIFIL), who is accompanying President Higgins, said that due to the volatile situation it was decided to avoid putting the President at risk.

"We have received reports of major protests and rioting in towns and villages across Lebanon this morning, including in the area where our Irish platoons are situated," he said.

President Higgins visited the UNIFIL headquarters in Lebanon this morning, where he was greeted by force commander Major General Stefano Del Col. The President also met Irish soldiers serving at the base in Naqoura. 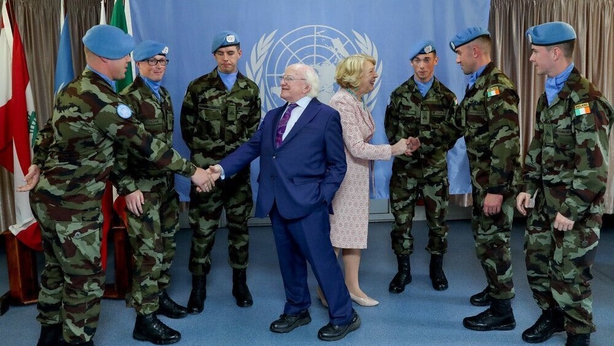 In his greetings, and following a guard of honour, the force commander told President Higgins he was very fond of the Irish contingent in Lebanon.

"When I was in command in Shama in 2014, I had an Irish battalion directly under my command and my Aide de Camp was Irish. He was trying to teach me your language, the Irish, but it was very difficult," he said.

During their meeting, the President and commander discussed the UNIFIL operation in Lebanon and the latest developments in the southern region where the majority of the Irish troops are stationed.

There are 460 Irish soldiers serving on the UNIFIL mission in Lebanon. The majority of the Irish contingent is stationed at the Irish Battalion headquarters in At Tiri.

Two further platoons, comprising 30 soldiers each, are positioned in outposts along the border with Israel. There is also an Irish presence in the UNIFIL Sector West headquarters in Naqoura.