The chairman designate of the Residential Tenancies Board has said the fear of difficult tenants is one of the reasons why "accidental" landlords are getting out of the market.

Speaking to the Oireachtas Housing Committee, Tom Dunne said some landlords are "vulnerable" and he said they need support.

He said many are "accidental" landlords who might not be aware of the risks associated with being a landlord.

Mr Dunne said many do not have the money to carry out repairs and he said many landlords were "vulnerable".

He told the committee that the State needs to look at housing in a broad way and look at how the system interacts with other systems like social welfare and planning.

He said if person rents from a professional landlord such as a REIT (Real Estate Investment Trust) they have a stronger security of tenure than if they rent from a private landlord.

Mr Dunne said a REIT could not recover possession on the basis that it wants a family member to occupy the accommodation.

He said the property investment companies were usually in it for the long term and were not going to sell the property.

He said commercial landlords will be a feature for the future and he said this was happening around the world. 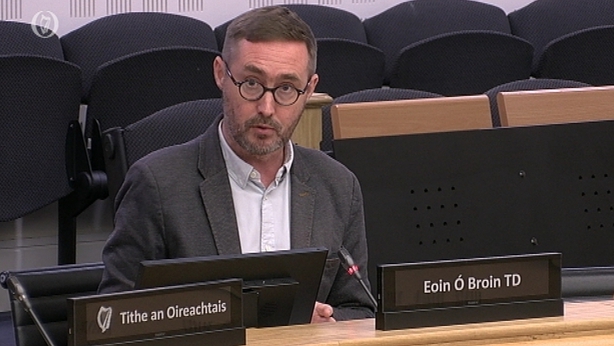 He said there was growing evidence that when REITs purchase properties with tenants living in them, there was greater insecurity because they want to get new tenants into the property to increase the rent price.

He said REITs were in receipt of tax benefits internationally and he said there is growing evidence that their involvement in the rental market can lead to affordability issues.

Experts in the housing sector have raised concerns about the new Land Development Agency, saying it could result in the privatisation of public assets.

The LDA was set up last September and the Government announced it would build 150,000 homes over 20 years, using State land and private sites.

Up to 60% of the houses built could be for the private market with 30% affordable housing and 10% for social housing.

The committee is discussing the Land Development Agency Bill 2019.

Speaking to the committee, Rob Kitchin, Professor at Maynooth University Social Sciences Institute, said legislation underpinning the agency is based on supporting the use of public lands in conjunction with private actors for profit.

Orla Hegarty, an assistant professor in the UCD School of Architecture, said the proposed powers of the LDA are very wide-ranging and removed from direct government controls.

She told the committee that speculative development is potentially the "Achilles heel" of the LDA proposition.

The CEO of the Irish Council for Social Housing, Donal McManus, said the current 10% social housing mandated on Land Development Agency sites is too low.

John O'Connor, Chief Executive Officer, Housing Agency said they would be transferring three sites initially to the LDA in Skerries, Ballbriggan and Naas.

He said that these lands should be retained under public control in the long term.

Mr O'Connor said one of the main objectives is for the LDA to deliver housing on scale to address the housing crisis.

He told the committee that the developments must be sustainable and the climate change issues taken into account.

Mr Ó Broin asked the Housing Agency if limiting the LDA to 40% social and affordable housing was correct or if it should be bigger.

In response, Mr O'Connor said it would be the Agency's preference that there would be higher levels of social and affordable housing.