Politicians are being warned about a dramatic decline in populations of bird species by Birdwatch Ireland later today.

It says some species groups have seen their numbers fall by 50% since the 1970s.

It has blamed the significant drops on climate change, agriculture, hedge cutting, pollution and burning of scrub.

The organisation is due to make a submission to the Oireachtas Committee on Culture and Heritage.

In its opening statement Birdwatch Ireland says that the rate of loss of bird habitats is happening "so fast" that birds cannot cope with the change and their populations have been "decimated".

It says while there are some good news stories the trends for some key species groups are very worrying.

Birdwatch Ireland's research has shown that the country has lost half a million waterbirds or almost 40% in less than 20 years. Among species in decline are Lapwing, Mallard, Tufted Duck, Goldeneye and Pochard.

It says that there has been an "almost complete extermination" of farmland birds such as the Corncrake.

It says the Curlew is now on the verge of extinction in Ireland with only 150 pairs remaining of the 5,000 pairs nesting in Ireland in the 1960s and 1970s.

Countryside and farmland species have also been falling.

Results from monitoring indicate that while Goldfinch and Blackcap are stable or increasing, about a quarter of birds such as Stock Dove, Swift, Greenfinch, Stonechat and Kestrel are exhibiting significant population falls.

The organisation says there are 12 different species of wader nesting in Ireland and of these 11 are in serious decline.

Birdwatch Ireland says the main reason for the declines in farmland birds is habitat loss, the widespread drainage of wetlands and damp pastures and more intensive management of agricultural grasslands.

The bird populations have also been affected by the onslaught of mink, rats, foxes, and other predators both native and alien.

The Corn Bunting once common in arable land became extinct in Ireland in 1991.

Water quality in lakes and rivers affected by nutrient runoff have also had negative effects.

However, Birdwatch Ireland says there have been positive conservation success stories. 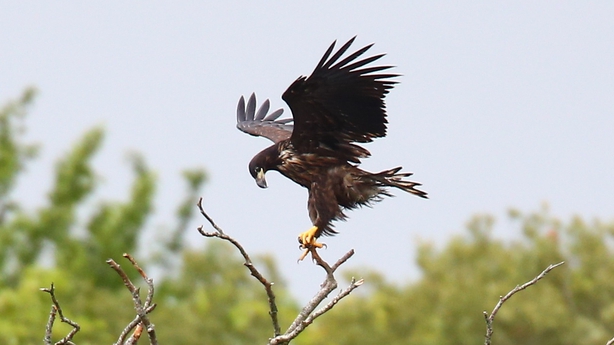 The Golden Eagle, White-tailed Eagle and Red Kite have been reintroduced.

But other birds of prey have suffered from hunting and poisoning.

The Barn Owl population has declined dramatically due to intensification of agriculture.

Some species have adapted to living alongside humans successfully. Others such as the Swift have undergone a 50% decline in the last 20 years partly due to the lost of nest sites.

Among seabirds Puffins and Kittiwake are globally threatened and have declining populations in Ireland.

Others are suffering from rising sea levels, the loss of beach nesting habitats, increasing summer storms, ingesting plastic and becoming entangled in nets.