Football Association of Ireland board members came under an intense five hours of scrutiny at the Oireachtas committee today.

Former chief executive, now executive vice president of the FAI, John Delaney told members he was precluded from making any further comment on the loan, his role as CEO or the finance arrangements at the FAI due to legal advice.

Social Democrats TD Catherine Murphy, who has instigated FAI hearings since November, asked why the €100,000 loan was not recorded and passed to auditors, and why would the board be "kept in the dark".

"I am absolutely astonished this is the way the FAI would've conducted business at this point," she added.

President of the FAI Donal Conway said it was "the only occasion that this kind of transaction actually occurred", and in his 13 years on the board, has never seen this type of incident arise before.

The committee heard that the three FAI members who were first made aware of the loan were the chief executive, honorary secretary and president of the FAI, but the full board did not know about the loan initially, Mr Conway confirmed.

"Awareness of the loan was confined to a certain number of people," he said. "It was not deliberate, it was an omission on our part."

Read more:
As it happened: FAI tells committee it 'won't jeopardise funding'
Watch: 6 moments from John Delaney's statement
Sketch: Delaney parks the bus as FAI play for 0-0 draw
Sketch: TDs give good account of themselves in 2nd half

Fianna Fáil's Robert Troy asked a number of questions which officials found difficult to answer or refused entirely, including whether the FAI would accept same governance practices from League of Ireland clubs, and why Mr Delaney did not help Bray Wanderers FC when they almost went under last year.

Under further questioning, it emerged that a previous FAI statement which said the loan was "made in the best interest of the FAI, and the board was kept fully informed of this matter at all times", was not seen by Mr Conway before it was released.

"So, something that came out about the board being kept informed at all times, but you as head of the board weren't aware of it? Strange," Mr Troy added.

Sinn Féin's Imelda Munster accused the organisation of disrespecting clubs and supporters, as well as the committee, by hiring financial firm Grant Thornton to investigate the loan.

"Why would a board bring in someone else that the people in the room know the answers to?," she said.

"It appears that you're giving the two fingers to Sport Ireland, the committee, and sporting clubs.

"Explain why is it you've engaged an outside company to investigate something that the people in the room know? How is that not two fingers to everybody?

Mr Conway replied: "We receive public funding, and scrutiny follows that money, the board isn't giving two fingers to anybody.

"The board brought in Grant Thornton as a resource, as a support to the finance department."

Ms Munster added that given everything that has come to light, was it appropriate to create a new position for the former CEO.

"Do you accept it appears to people that it's 'same old, same old' at the FAI board?," she said.

Mr Conway said the appointment was dictated by Mr Delaney's connections to UEFA and FIFA, and that they could not think of another person who would have such connections suited to the role.

Solidarity TD Ruth Coppinger asked how the position will be funded if the FAI has a cash flow problem.

"I don't want to discuss how it will be funded at this time," Mr Conway replied.

The FAI would also not disclose if there is a pension in place related to Mr Delaney's former position in the FAI.

The committee moved to Sinn Féin's Jonathan O'Brien, who asked officials: "The 100,000 loan that wasn't recorded in monthly financial statements of the FAI, can I ask why it wasn't? Can anyone answer me?"

It then emerged that the FAI's new financial officer had only been in the role for two weeks.

Mr Conway replied after an extended pause: "Can I establish that if I'm given time?

"When I'm finished here this evening I'll get it sorted for you."

O'Dowd: Some answers provided by FAI

The FAI provided some but not all of the answers required during the delegation's appearance, according to the commitee's chairperson.

Speaking on RTÉ's Six One News, Fergus O'Dowd said that Mr Delaney gave his legal advice for not answering certain questions and the committee has to respect that.

He also said the FAI representatives were not obliged to appear before the committee.

Mr O'Dowd added that he believed the time had come for a "sea change" in the board of the FAI. 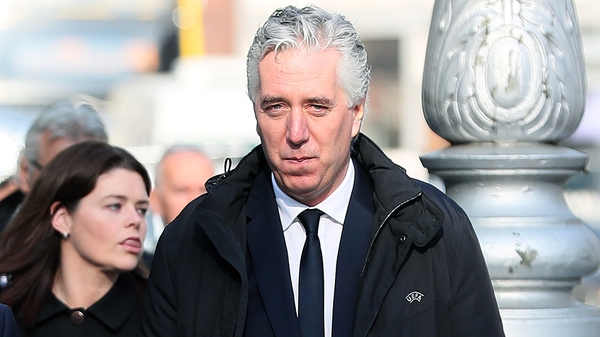 Delaney tells committee he is 'precluded' from commenting on loan