The Tanáiste has told the Dáil that the civil servant on the board of the National Paediatric Development Board followed the process for informing the Department of Health of the cost escalation.

This morning an Oireachtas committee was told the civil servant in question had an obligation to inform the Minister for Finance of the escalating cost of the proposed children's hospital.

Labour TD Alan Kelly asked the Comptroller and Auditor General to clarify the reporting obligations in relation to civil servants who are board members of non-commercial State bodies.

In response, Seamus McCarthy told the Oireachtas Public Accounts Committee that a circular was issued detailing the protocol for civil servants on boards of non-commercial State bodies. 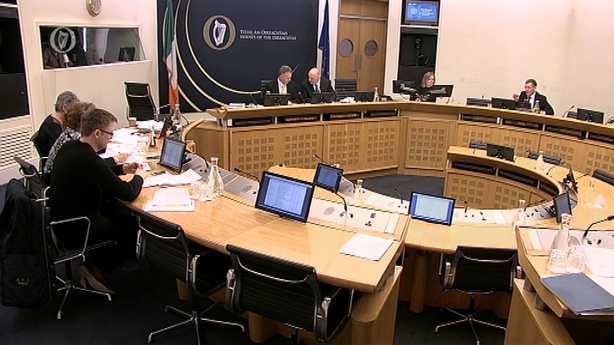 He said it outlines steps to be taken where they have concerns "that they've raised but that hasn't been answered to their satisfaction where there is a significant public policy issue at stake".

Mr McCarthy said this circular requires the relevant minister to be notified "without delay where there are serious weakness in control that have not been addressed, despite being drawn to the board or the chairman, or there is a significant strategic or reputational risk to the state body that is now being addressed".

Mr Kelly said the Minister for Public Expenditure, Paschal Donohoe, and the Taoiseach had repeatedly said the civil servant on the board was acting in a personal capacity, but we now know this is "completely and utterly inaccurate".

Speaking during Leader’s Questions in the Dáil, Simon Coveney said the civil servant was appointed by the Minister for Health, and the Department of Health was the accountable department.

Mr Coveney said the Department has already set out the timeline for when they were alerted by the board of the cost escalation.

"There were agreed codes in terms of communications both on the Development Board for the hospital and also between that board and the accountable department, which is the Department of Health. Those codes and that process was followed," Mr Coveney said.

Ms Shortall called for clarification on whether the civil servant notified the Minister for Finance on the projected overruns.

Meanwhile the chair of the PAC, Fianna Fáil TD Seán Fleming, said the committee would seek to publish a report by consultants Mazars from 2018 on the cost overrun at the hospital.

Sinn Féin TD David Cullinane said the report "nails a lot of the issues" in terms of the cost overruns.

He said the report should have been given to the committee in advance of the Department of Health's appearance last month.

Wallace calls for retendering of project

Independent TD Mick Wallace has said the Government should retender the entire project rather than sticking with the fixed-price contract.

Responding in the Dáil this afternoon, the Tanaiste said the advice to Government was that retendering the project would not result in a significant saving.

Mr Coveney said a mistake was made when costs and quantities were being estimated, but that the Government had learned lessons from the mistakes that were made.

Mr Wallace said the contract "was not good enough" and would cost too much money.