Minister for Health Simon Harris has said he is very confident that we are at a point of no return in delivering the new National Children's Hospital.

He said it was something that had been much promised for many years by politicians who had not delivered it.

Speaking on RTÉ’s Six One programme, Mr Harris said that the day that the new hospital opens, there will be politicians tripping over themselves to be associated with it.

He said the decision with this hospital was a tough one because of the scale of the cost, but said he has no doubt that the only decision he would have regretted would be if he did not proceed with it.

Earlier, Mr Harris has said there could be sanctions for individuals in relation to the cost overrun for hospital. 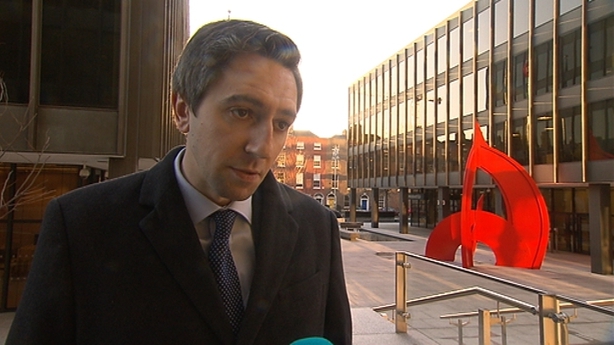 Speaking on RTÉ's Today with Sean O'Rourke, he said it was always the Government's intention to hold individuals accountable for the overrun, adding that the Taoiseach made this clear yesterday.

Mr Harris said it would be wrong to pre-empt the outcome of the PwC report into why the cost of building the new NCH had risen to at least €1.7 billion.

The minister said PwC would be looking at who did "what, where and when" or what was not done, but that PwC could not sanction individuals and that that would be down to the Government.

He said the inquiry would also look at ways to reduce costs but that he would not allow the project to be halted.

In relation to the resignation of Tom Costello as Chairman of the board, he said he had a conversation with Mr Costello and both agreed that reflection was needed.

He said he did not encourage him to resign and said Mr Costello took that decision himself and that he was not expecting the resignation on Saturday when he received it.

Mr Harris said he had no doubt whatsoever that Mr Costello was only motivated by good in relation to the NCH project.

The minister said he would take political accountability in relation to the project very seriously but that he would not allow it to be jeopardised or paused.

He added that it was his job as Minister for Health to make sure the project was delivered.

Minister for Finance and Public Expenditure Paschal Donohoe has said information relating to the escalating cost of building the new children's hospital should have been made available earlier than it was.

The minister said he became aware of  the scale of the cost last November.

"I was not informed of the development of the issues. I do have an official on the board. That official was bound by the responsibilities he has to the board."

He said it was important that a review by PwC into why the construction costs of the hospital have spiralled to at least €1.7bn, was allowed to come to a conclusion.

Speaking on RTÉ's Morning Ireland the minister said he still believed the hospital should go ahead and it was being build in the right location.

The minister said that he ultimately was involved in the decision to go ahead with the hospital at the higher cost.

"I did so because I believe if we had not we would not have had a National Children's Hospital for the foreseeable future, and children, and very sick children, would have been the losers in this."

"Things should have been done differently in relation to the flow of information but ultimately if we do not go ahead with this project, even at the higher cost we are not going to deliver a transformative project, for the health of young children in this country."

The minister said he will wait until the PwC review is concluded before he makes his own views known but he supports the current site at St James's Hospital.

The minister said next week he will be able to outline other projects that will be affected by the cost overruns of the National Children's Hospital.

Meanwhile Fianna Fáil's health spokesperson has said a reduction in costs for the hospital is more important than accountability for the overruns in the project.

Yesterday, Taoiseach Leo Varadkar said that the terms of reference for a review of the overruns by PwC have been changed and can now hold individuals accountable.

Prior to that, the PwC probe could not make findings against the individuals overseeing the project.

However, speaking on Morning Ireland Stephen Donnelly said: "accountability is important, what is more important right now is using a very small window of time to get these costs back down again," he said.

"Every million euro we can reduce these costs means another hospital bed somewhere else in the country can be built."

Mr Donnelly has said he does not have confidence in the board overseeing the build and would not be surprised if there are more resignations.

The chair of the hospital's development board, Tom Costello, announced on Saturday that he was stepping down following the controversy over the spiralling costs of the project.

The Wicklow TD also criticised the Government for withholding information from the Dáil in relation to the project, saying his colleagues are being "kept in the dark".

Mr Donnelly said it is not acceptable that the Minister was notified of cost over runs on 27 August and the Cabinet green lighted the project in December, aware of the spiralling costs before announcing the PwC investigation into the costs in January.