There were robust exchanges during the RTÉ Prime Time presidential debate over President Michael D Higgins’ use of the Government Learjet.

It was the final televised debate involving all six candidates vying for the highest office in the State ahead of the electorate going to the polls on Friday.

The key issues raised on the campaign trail, including presidential expenses and the candidates' knowledge of the Constitution, were covered on the programme presented by David McCullagh.

Mr Higgins said he used the jet twice in Ireland this year, to go to Belfast and Kerry, saying he personally did not make the arrangements.

He said his travel arrangements were made by his office based on logistical and security issues.

It came after Independent candidate Peter Casey accused him of lying and making four trips around Ireland during 2018.

The president has come under increasing pressure about his use of the Government's private jet to fly to Belfast in May.

He claimed that security concerns meant he had to use the Government plane and a State car.

Mr Casey added: "Michael you have to start telling the truth. You didn't tell the truth when you said you were going to stand for one election, that was a lie."

Mr Higgins said he was not going to comment on people who are suggesting "that I am incapable of telling the truth".

He said his life had been about "authenticity" and he had been a campaigner and stood for values when they were unpopular.

The 77-year old, who is running for a second term in office, said of his use of planes: "Frankly, I prefer to go by road all of the time.

"I'm not comfortable with any extravagance."

Businessman Seán Gallagher said Mr Higgins' "changing story" about the matter was "wholly unacceptable", and he accused him of "hiding behind security reasons".

He said the president should appreciate that at a time when so many people in Ireland were struggling with housing and homelessness, that taking a jet 100 miles sent the "wrong message" to the people.

Sinn Féin candidate Liadh Ní Riada said it was "disappointing" that the president did not have "more foresight" to be more accountable.

"We are being drawn into a financial discussion when candidates haven't even set out their stalls yet," she said.

Mr Gallagher was asked by Gavin Duffy whether he accepted it was a mistake not to have taken part in debates that Mr Higgins did not participate in.

Mr Gallagher said he would be participating in the next debate on Virgin Media One.

Ms Ní Riada said it was "wrong" of both Mr Gallagher and Mr Higgins not to turn up at some of the debates so far, including the Claire Byrne Live programme on RTÉ last week.

Ms Freeman accused Mr Gallagher of arrogance for not turning up at debates.

Mr Gallagher replied that it was not fair for five candidates to turn up and have a go at each other while one escaped scrutiny.

He said none of the candidates should have debated unless Mr Higgins participated.

Mr Higgins has said he was unable to take part in all debates because of presidential commitments.

The six candidates were also asked about their income and tax affairs.

Mr Casey said he was not tax resident in Ireland as he pays tax in the United States.

He added that he would be handing back his Green Card soon and would publish his expenses for his campaign tomorrow.

Mr Gallagher said the race was not about his bank balance and that he paid his fair share of tax.

He said he never had a tax issue and never had an offshore account. He said his affairs were very tight and he had always been compliant.

Ms Ní Riada said her take home pay was €47,000, but she admitted it was not the average industrial wage as she had claimed in an article in the Hot Press magazine.

Ms Freeman was asked about the loan she obtained from businessman Des Walsh in order to fund her campaign.

She said the loan she got was a personal loan from his own personal wealth. She added that "the establishment" had tried to stop the presidential election from happening.

She said all parties were backing the incumbent and said the Taoiseach was dictating how people voted.

Asked on publishing presidential expenses, Mr Higgins said it was important that those issues were debated.

Mr Higgins was asked why he would only publish his presidential expenses after the election and not beforehand.

Mr Higgins said he has operated in the same way that all his predecessors have and he said that any change would not just affect him but every subsequent incumbent, which is why he would wait until re-elected to do it.

Each of the candidates was asked to outline their priorities for the office, with Mr Duffy saying the president would maintain relations "on this island and within these islands" following Brexit.

Mr Casey raised the difficulties faced by middle Ireland and he also said he would include his wife in an all-female Council of State.

Mr Gallagher said he would focus on disabilities, trade, and the unification of Irish people.

Ms Freeman said she wanted to look after the physical and mental well-being of the people of Ireland.

Ms Ní Riada said what mattered was that there was a modern, progressive president in office.

Mr Higgins said a president can initiate the discussions on how are we going to turn climate change into reality.

Mr Gallagher said he got more than half a million votes in the last election and he had been focused on his businesses since then.

But Ms Ní Riada accused Mr Gallagher of lining his own pockets since 2011. Mr Gallagher said he did not think it was fair to be criticised for trying to make a living.

Ms Freeman said she agreed with Mr Duffy that Mr Gallagher was trying to portray himself as a social entrepreneur.

Speaking about her previous comments about the HPV vaccine, Ms Ní Riada said it was an error for her to raise concerns over the lack of information about the vaccine.

She said she raised the issue as a parent at the time, and that she does support the vaccine.

"I was really expressing a concern about the lack of information about the vaccine," she said. "It was an error at the time. I think it's wonderful and it saves lives."

Asked about his absence from public life since 2011, Mr Gallagher said he had to rebuild his business from scratch. He also said he had been active in areas that he was committed to, such as helping the economy and rural Ireland.

He said that he has provided work spaces across the country, which are helping to support jobs.

Mr Gallagher also said that he did not take part in any media because of an ongoing legal case with RTÉ, which concluded last year.

Mr Casey said he did not consider Travellers a different race to him so he could not be racist.

He denied that he was a racist and he rejected Mr McCullagh's suggestion that he had attacked Travellers with one brush.

"It wasn't an attack, it was an observation that was accurate," he said.

He was speaking after comments he made about the Traveller community last week, which brought widespread criticism. 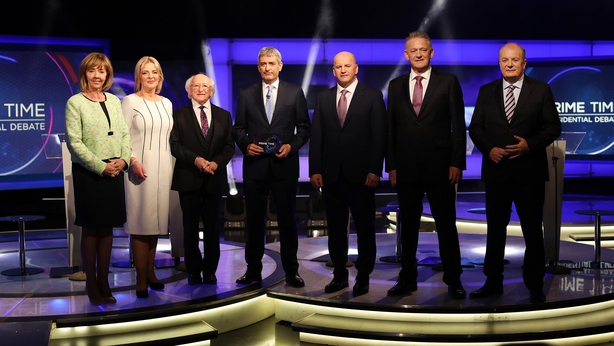