Six people will contest the presidential election after the deadline for submitting nominations closed at midday.

The election is due to take place on Friday 26 October, in conjunction with a referendum on blasphemy and its place in the Constitution.

In order to contest the election, candidates required the support of four local authorities or the backing of 20 members of the Oireachtas.

The sitting president can nominate himself to contest the election, which Mr Higgins did.

Ms Ní Riada was nominated by the 28 Sinn Féin members of the Oireachtas, while the remaining four candidates received the backing of local authorities.

Journalist Gemma O'Doherty received the nomination of one local authority, Laois County Council, but did not gain sufficient support to enter the race.

Ms O'Doherty had also been attempting to secure the backing of 20 TDs and Senators to make it to the ballot paper.

Candidates were required to submit their papers at the Customs House to complete the formal process of entering the election.

The opening debate of the campaign is due to take place on RTÉ Radio One tomorrow from 1pm. 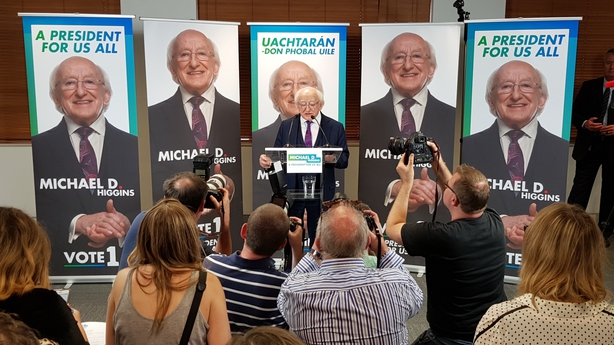 This afternoon, Mr Higgins launched his campaign in Dublin.

He said he was standing again because he was passionate about the challenges facing the country and the possibilities of the coming years.

Mr Higgins said he offered the electorate experience, authenticity, understanding and deep love for our country and all its people.

He also said will participate in as many debates as he can during the campaign.

Asked about a €300,000 Áras an Uachtaráin fund revealed this week at the Joint Oireachtas Public Accounts Committee, Mr Higgins said he had "no difficulty" in providing information about how the money was spent.

Meanwhile, Joan Freeman will launch her campaign on Monday and Gavin Duffy's launch will take place on Tuesday.

The campaign teams of Sean Gallagher, Liadh Ní Riada and Peter Casey say they will launch their campaigns in the coming week.