Independent Senator Joan Freeman has joined businessman Sean Gallagher in having secured the support of four local authorities to contest the Presidential Election.

She was nominated by Fingal and Galway County councils earlier this afternoon.

Ms Freeman previously received a nomination from Cork City Council on 3 September. A vote on that nomination was formally taken this evening, with receiving 13 votes for, with two against and 11 abstentions.

Speaking in Swords after receiving the Fingal nomination, she said: "What I am trying to do is say that maybe we need to change our focus.

"President Michael D Higgins brought a dignity to this country and was perfect for the time that was in it. The President needs to reflect the people at that time and we are in a very different place and time now," she said.

She added we need to "refocus and change things. As President, I believe I can influence change."

Asked if she is prepared to face a gruelling Presidential campaign, she replied: "I put my head above the parapet simply because I believe in what I am doing, so I am prepared to be scrutinised."

Leitrim, Mayo, Roscommon, and Wexford county councils all voted in favour of Mr Gallagher running in the election next month.

Mr Gallagher has said he was honoured and humbled to have received the support of the four county councils.

Speaking on RTÉ's Six One, he said he had reached out to other councils asking them to now withdraw his name in order to allow other candidates to be nominated.

He said he did not wish to be Michael D Higgins' replacement, but he wished instead to be his successor and continue the great work he has done.

Mr Gallagher said he was looking forward to laying out his vision in the upcoming campaign.

He said all contests are difficult but he was heartened by the support he has received.

Mr Gallagher said he would be campaigning for support across the political divide and to receive the support of Fianna Fáil, Fine Gael, Labour or independents. 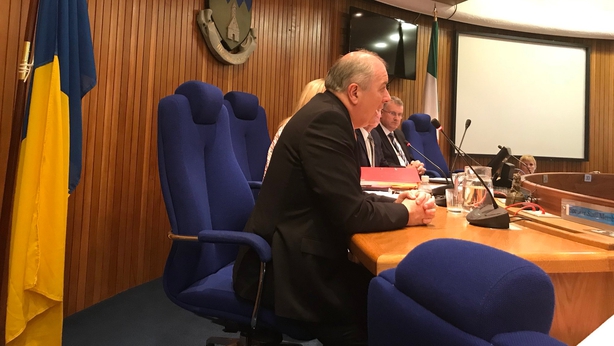 Mr Duffy now has three endorsements from local authorities as he was supported by Meath County Council last week.

Westmeath Council heard from Mr Gallagher today but will not vote on a candidate until 17 September.

It is understood the council is split in support for both Mr Gallagher and Mr Duffy, who addressed them two weeks ago.

A number of other prospective candidates seeking endorsements to contest the Presidential Election are appearing before councils.

Offaly County Council met this afternoon to hear from candidates, with no vote.

A sitting president can nominate themselves to seek a second term and President Michael D Higgins has already indicated he intends to run.

Presidential election hopefuls need to secure the support of four local authorities or 20 TDs and senators to stand in the election.

Each local authority can only endorse one candidate.

RTÉ understands that the name of the veteran TD, who has said he will retire at the end of the current Dáil, will go before the party's Ard Comhairle meeting this weekend.

But it was decided at a meeting of Sinn Féin's Midlands North West Cúige organisation in recent days to put forward the names of Mr Ó Caoláin and Ms Ní Ríada to the party's ruling body or Ard Comhairle.

Sources within the party still believe that Ms Ní Ríada will be announced as the party's candidate this weekend.