A spokesman for Taoiseach Leo Varadkar has said Britain's commitment to a "backstop" solution to avoid a hard post-Brexit border is legally firm and will apply until something better is agreed.

"The backstop is as legally firm as the Government said it would be in December," the spokesman said.

"The UK has today publicly accepted the need for such a backstop to be in the text of the (EU) withdrawal agreement.

"The backstop applies unless and until something better is agreed," he said.

The spokesman added that EU leaders will decide on Friday if enough progress has been made to move on to the issue of the future relationship.

The European Union and Britain earlier agreed that there must be a backstop solution to ensure that there is no hard border on the island of Ireland, according to the draft text of a Brexit treaty.

A backstop agreement would fully align Northern Ireland with the rules of the EU in order to avoid a hard border.

The EU's chief Brexit negotiator, Michel Barnier, said that the backstop solution will apply "unless and until another solution is found".

It comes after British Prime Minister Theresa May rejected such a solution as unacceptable just weeks ago.

"We agreed today that the backstop solution must form part of the legal text of the withdrawal agreement," Mr Barnier said.

EU, UK agree there should be 'backstop' solution on Irish border | https://t.co/pkKzsqZYbH pic.twitter.com/vEF7TVUKpQ

Speaking in Brussels, he said that a landmark deal has been reached on transition arrangements that will last for nearly two years after the Brexit divorce next year.

"We have reached an agreement on the transition period," he told a press conference in Brussels after negotiations with his British counterpart David Davis.

"The transition will be of limited duration."

It comes after Tánaiste and Minister for Foreign Affairs Simon Coveney met Mr Barnier this morning.

All sides are united in their desire to create a frictionless border after Brexit and the issue is expected to dominate talks next week.

The document said: "The negotiators have reached agreement on some elements of the draft protocol.

"They further agree that the full set of issues related to avoiding a hard border covered in the draft reflect those that need to be addressed in any solution.

"There is as yet no agreement on the right operational approach, but the negotiators agree to engage urgently in the process of examination of all relevant matters announced on 14 March and now under way." 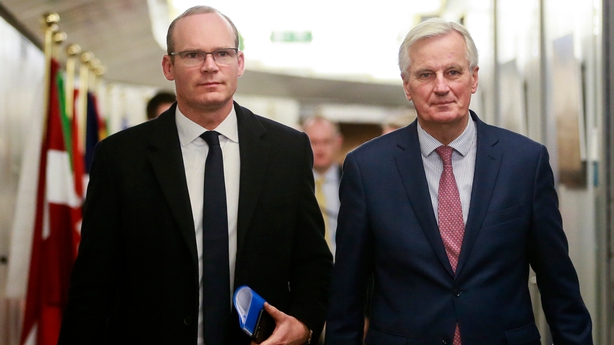 The DUP is adamantly opposed to any deal creating a difference between Northern Ireland and the rest of the UK.

It has said it is not concerned by the British government's commitment to a "backstop" solution to avoid a hard post-Brexit border as no final agreement has been made, a party source said.

She said she did see some equivocation by the British government again, but clearly this was what they signed up to in December.

Asked if she was confident it will be in the text, she said they had told Mr Barnier that this had to be the bottom line as she had gotten assurances in that regard and she thought his commentary today backs that up.

She said that until you see something firmly laid down in a legal text then they would always be cautious about giving a firm due judgement on that.

Laws were agreed in principle surrounding state aid and the wholesale electricity markets; Northern Ireland is part of an island-wide energy market.

The Common Travel Area allowing free movement of UK and Irish nationals between Ireland and the UK was agreed.

The draft agreement said: "With respect to the draft protocol on Ireland/Northern Ireland, the negotiators agree that a legally operative version of the 'backstop' solution for the border between Northern Ireland and Ireland...should be agreed as part of the legal text of the Withdrawal Agreement, to apply unless and until another solution is found."

The EU and UK agreed to maintain the necessary conditions for continued North-South cooperation, including in the areas of environment, health, agriculture, transport, education and tourism, as well as energy, telecommunications, broadcasting, inland fisheries, justice and security, higher education and sport.

Mr Davis said it remained the UK's intention to achieve a partnership that was so close it did not need Northern Ireland-specific measures and pledged to engage in detail on all scenarios set out in December's Joint Report between the two sides.

He said: "We have also reached consensus on the full set of issues which need to be addressed in any solution in order to avoid a hard border, which is why, last week, we set out a work programme to tackle them.

"There are also some elements of the draft protocol, such as the Common Travel Area, on which we agree.

"So while there is as yet no agreement on the right operational approach, we know what we need to do, and we're going to get on with it."

He also said that progress on Irish issues "remains a key priority for both negotiating teams".

Speaking at the same press conference, Mr Davis said that the aim on the Irish issue is to avoid disrupting trade between Ireland and Northern Ireland, or between the UK and Ireland.

He said that both the EU and UK are committed to the joint report "in its entirety".

He said that they have agreed on the need to include legal text detailing the "backstop" solution that is "acceptable to both sides".

EU and British government officials have been locked in discussions for several days in preparation for the summit of EU leaders in Brussels later this week.

A key goal of their talks is to reach understandings about the transitional arrangements that will apply from March next year, until the UK finally leaves the EU at the end of 2020.

This afternoon Michel Barnier and David Davis addressed a news conference in Brussels and talked about the substantial progress made to allow for an orderly withdrawal.

It showed some 120 pages of the deal in question: Material colour coded green indicated ‘agreed’.

Material colour coded yellow suggests it is being worked on, the colour white shows it is still under negotiation.

Much of the material related to Ireland and the border is coloured yellow or white.

The controversial backstop arrangement, that would keep Northern Ireland in the customs union and the single market, unacceptable to the DUP and the British government, is still on the table.

The obvious conclusion from these discussions is that the border issue has not been resolved.

More work on the issue and concrete proposals from the British government are still required because the "nuclear option"- nothing is agreed until everything is agreed, remains open to the Irish Government.