Sinn Féin and the Democratic Unionist Party are hammering out details of a potential agreement that could restore power-sharing in Northern Ireland.

The two main parties at Stormont are in negotiations after a scheduled all-party meeting this afternoon was scrapped at short notice, amid mounting speculation a deal may be in sight.

Sinn Féin and the DUP have acknowledged progress has been made towards a breakthrough, but  insisted issues remained.

Both said the talks process should conclude next week.

Sinn Féin President Gerry Adams said: "It isn't sorted out as we speak. We have made some progress but there are still considerable obstacles but as I said to our unionist friends, this is the last chance agreement".

"They need to embrace the need for rights for everybody and agree a space where we can all moderate our differences," he added.

DUP leader Arlene Foster added: "We have had a very intensive week of discussions. Progress has been made. We have more work to do. I have set out the parameters for a deal. It must be fair and balanced".

"Our negotiating team will continue working next week. I want to see ministerial-led government restored to Northern Ireland. I hope that can be achieved by devolved Government and will work towards that end," she added.

Stormont's five main parties had been due to meet for round table discussions with Northern Ireland Secretary Karen Bradley and Tánaiste and Minister for Foreign Affairs Simon Coveney at Stormont this afternoon.

The DUP and Sinn Féin did not attend, with Mrs Bradley telling the other participants the meeting would not proceed as planned because the main parties were involved in intense exchanges elsewhere in the building.

The episode has fuelled expectation of a possible breakthrough.

The parties are working to end an impasse that has left Northern Ireland without a properly functioning devolved executive for more than a year. 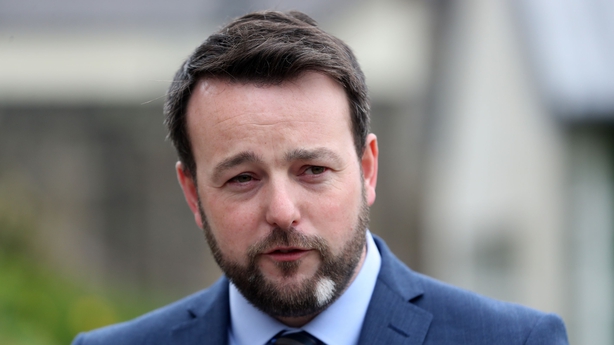 SDLP leader Colum Eastwood said it was clear the negotiations were an "exclusive two-party process", adding: "The SDLP are not here to window dress but we want to be constructive".

"I've told both governments when the two-party process is concluded and they are ready to engage in five-party negotiations, the SDLP will be ready to negotiate," he said.

Mr Eastwood added: "With a hard Brexit coming down the tracks that will cause economic, social and political chaos to our island, I also stressed to the Irish and British governments the need for the formation of a government urgently. "Everyone across these islands is talking about the threat of a hard border, yet here we have a political vacuum".

An Ulster Unionist Party source said: "Sinn Féin and the DUP are clearly running these talks and the two governments are just bystanders".

Substantive negotiations between the two main parties are unlikely to continue through the weekend as Sinn Féin is holding a special party conference in Dublin tomorrow to formally select Mary Lou McDonald as Mr Adams' successor as president.