The Cabinet has given formal approval to the holding of a referendum on the Eighth Amendment.

Speaking at a press conference following a special Cabinet meeting, Taoiseach Leo Varadkar said that the referendum will ask citizens whether they want to retain the Eighth Amendment of the constitution, or repeal it and replace it with an enabling provision that gives responsibility for legislating on abortion laws to the Dáil.

This evening Cabinet gave formal approval to the holding of a referendum on abortion - @campaignforleo pic.twitter.com/UmGEGoShYG

Minister for Health Simon Harris has also been given permission to draft a bill that will be introduced into the Oireachtas if the referendum is passed.

The Government will begin drafting legislation in line with recommendations made by the all-party Oireachtas committee last month, which said that the Eighth Amendment should be repealed.

It also proposed that terminations without restriction should be allowed for up to 12 weeks.

Mr Varadkar told the conference that the Cabinet approved a referendum at the end of May. 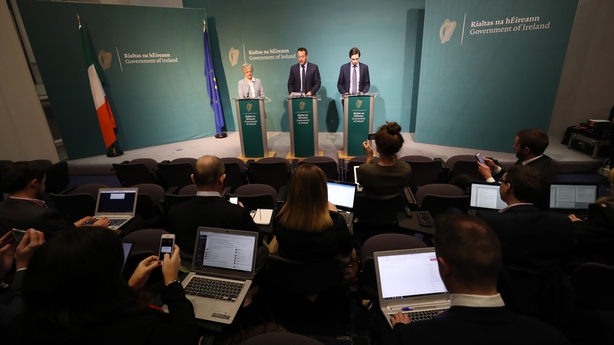 He said: "We have abortion in Ireland but it is unsafe, unregulated and unlawful, and in my opinion we cannot export our problems and import our solutions."

He said that he would support legislation to allow for a doctor-led service that would allow abortions in Ireland up to 12 weeks.

.@campaignforleo says 'we cannot continue to export our problems and import our solutions' on abortion pic.twitter.com/1ElwLfbJvf

"I know this will be a difficult decision for the Irish people to make," said Mr Varadkar.

"It is a very personal and private issue. And for most of us, it's not a black and white issue – it's one that is grey.

"It is a matter for people to make their own decision based on the evidence they hear, compassion and empathy and I want the debate to be respectful on all sides and it should never be personalised."

.@campaignforleo says it will be a difficult decision - 'for most of us it's not a black and white issue' pic.twitter.com/Sbvumd2cuW

Mr Varadkar told the conference that there were many shades of opinion around the Cabinet table, but that all members agreed that change was needed.

He also said that the option of repeal and enable of the Eighth Amendment follows advice from the Attorney General.

The Taoiseach said that a summary of the Attorney General's advice to Cabinet will be published tomorrow.

He also said that he briefed Fianna Fáil leader Micheál Martin on the development.

Mr Harris told the conference: "We are moving forward on the steps necessary to give the Irish people their say on the substantive issue of the Eight Amendment - for the first time since 1983."

He said he welcomed the clarity of the decisions that was made by the Government this evening.

The Minister said that it comes after "decades of indecision, confusion and uncertainty for women and their doctors, and I believe the neglect of women in this country at times of great need.

"We will ask people to address the question of whether this article should continue to be a part of our Constitution."

Mr Harris said that for anyone who wants change, "it is necessary to repeal" the Eighth Amendment.

'For anyone who wants any change to our present regime, it is necessary to repeal the Eighth' pic.twitter.com/h9Ei6axBJF

Minister for Children Katherine Zappone described the development as a "significant moment."

She said that a number of options were discussed at the Cabinet meeting, "so that a decision made by the Irish people will be legally robust."

Ms Zappone said: "It is my firm hope that we will have a respectful debate. I hope we will live in an Ireland someday soon where abortion is safe, legal and rare."

.@KZapponeTD says she hopes for an Ireland, some day soon, where abortion is safe, legal and rare pic.twitter.com/P9AX3BE6ZR

In a statement, Tánaiste Simon Coveney said: "The status quo of how women are treated in crisis pregnancy cannot remain.

"I am united with my Cabinet colleagues in agreeing to repeal the Eighth Amendment and allow enabling legislation.

"While there are differing viewpoint on the content of that legislation, particularly on 12 weeks access unrestricted, that is a matter for the Oireachtas to now debate. My views are clear on that and I expressed them at Cabinet."