Dr Ann Louise Gilligan, the wife of Minister for Children Katherine Zappone, has died after a brief illness.

She was also a co-founder and director of An Cosán education centre in Jobstown, Tallaght.

Ms Zappone's partner since 1981, the couple married in British Columbia in Canada in 2003.

In a statement, Ms Zappone said she is "heartbroken".

She added that Dr Gilligan "believed in the power of imagination to bring about personal and social change".

Both Dr Gilligan and Ms Zappone were prominent in the campaign for marriage equality in Ireland, culminating in the referendum in 2015. 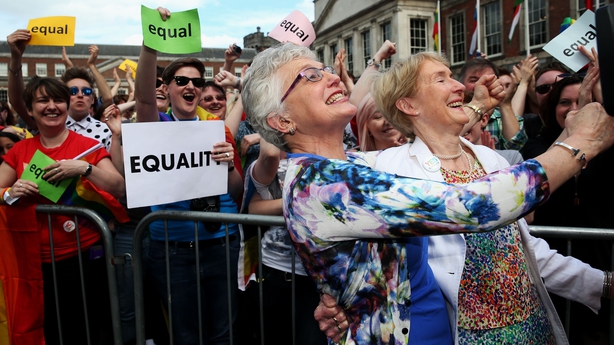 Following the passing of the referendum, Ms Zappone proposed to Dr Gilligan live on RTÉ News - a proposal she later accepted.

Ms Zappone said that "as a champion of equality, fairness and justice, Ann Louise was fearless."

She also expressed her "deepest appreciation to Professor Joe Harbison and the dedicated team at MISA in St James's Hospital who looked after Ann Louise during her recent brief illness."

She added that funeral arrangements will be made public in the coming days.

Ms Zappone was not present in the Dáil yesterday as new Taoiseach Leo Varadkar re-appointed her to Cabinet as Minister for Children.

During his announcement, Mr Varadkar said "our thoughts and prayers are with her at this time".

In a statement this afternoon Mr Varadkar extended his sympathy, and that of his Government colleagues, to Ms Zappone.