Enda Kenny has retired as party leader of Fine Gael, but will continue to carry out his duties as Taoiseach in full until a successor is chosen.

In a statement on Wednesday, Mr Kenny announced his decision to retire as Fine Gael party leader, effective from midnight.

Mr Kenny said he will carry out his duties in an acting capacity until his successor is elected and has asked that this be concluded by close of business on 2 June.

"I want to assure people that throughout this internal process, I will continue to carry out my duties and responsibilities as Taoiseach in full," he said.

Nominations for the contest to replace him will close on Saturday.

Intensive campaigning has been under way already by Minister for Social Protection Leo Vardakar and Minister for Housing Simon Coveney.

It is not yet clear if there will be any other candidates.

Mr Kenny said it has been a "huge honour and privilege" to have led the party.

"I would like to stress the huge honour and privilege that it has been for me to lead our party for the past 15 years, in opposition and into government on two successive occasions," Mr Kenny said.

"I thank all our members, past and present, for that privilege."

He said: "I intend to provide a brief but appropriate period for my successor to engage with groups and members supportive of Government, and with other Parties in the Dáil regarding provision of Government for the future".

The Taoiseach got a long standing ovation at the meeting of the Fine Gael Parliamentary Party, which was brought forward by an hour and began at 4.30pm.

One party member said Mr Kenny made a swift exit rather than waiting for questions or commendations.

Another member said: "The body language of some of his loyal supporters said it all, there were a few teary eyes."

After months of waiting, the end was swift and clear as Mr Kenny delivered an unambiguous statement that he will retire effective from midnight.

Mr Kenny delayed his resignation on a number of occasions this year.

He asked colleagues for time to visit the US for the annual St Patrick's Day celebrations and to meet President Donald Trump, continuing the unique tradition Ireland has of access to the White House every 17 March.

He stayed on to attend the European Council summit in Brussels at the end of April where the priorities for the Brexit negotiations were agreed.

Last week his role on the international stage continued when he held talks with EU chief Brexit negotiator Michel Barnier at Government Buildings.

Among Mr Kenny's final official overseas engagements will be a two-day trade mission to Chicago and the centenary commemoration of the start of the First World War Battle of Messines.

The contest for the Fine Gael leadership is decided by an electoral college that gives the parliamentary party, made up of TDs, senators and MEPs, 65% of the vote.

The rank-and-file members of the party have 25% and councillors 10%.

Mr Kenny paid tribute to loyal constituents and supporters in Mayo who he has represented since 1975 and to his personal staff.

"I especially want to thank my wife Fionnuala, our children, my siblings and their families for their understanding of my work, and indeed for accepting the many intrusions of politics into family life in the interest of building our country.

"I could not have engaged as I did without that base," he said.

As he retires, Enda Kenny's economic record as Taoiseach is summed up by @davidmurphyRTE pic.twitter.com/QnHUZyMcm8 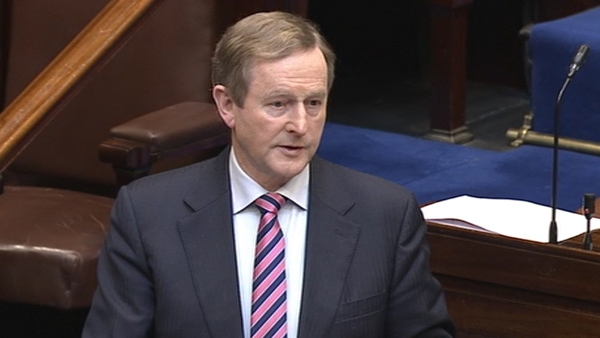 Kenny 'gave hope to a battered and bruised Ireland'