TDs have voted in support of a proposal to add 30 seconds of silent reflection to the daily Dáil prayer.

97 TDs voted in favour of the change - which was agreed by the cross-party Dáil Business Committee - and 17 TDs voted against it, while there were 19 abstentions.

Under the current Dáil standing orders, a prayer is recited in both Irish and English at the beginning of each day's proceedings.

Following this vote, TDs will now be asked to stand for the prayer and a subsequent 30 second silent reflection each day. 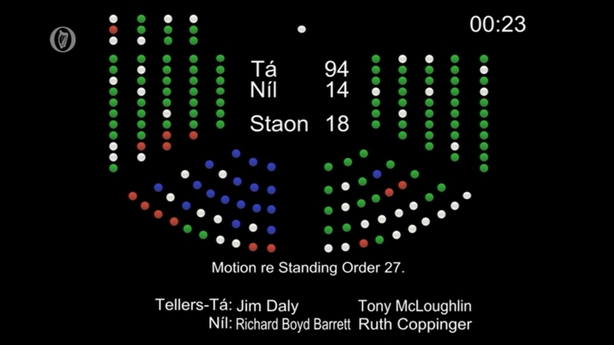 TDs voted on a series of amendments to the proposal this afternoon.

Firstly, a Sinn Féin proposal for TDs to stand for 60 seconds of silent reflection at the start of each day's business was defeated by 94 votes to 41.

A Solidarity/People Before Profit proposal for TDs to abolish the prayer being recited at the start of each day's Dáil business was defeated by 96 votes to 15, with 20 abstentions.

A third proposal from Solidarity/People Before Profit TD Joan Collins to replace the daily prayer with 30 seconds of silent reflection was also defeated by 96 votes to 19, with 17 abstentions.

Following this, the overall vote on adding 30 seconds of silent reflection to the daily prayer was passed.

Solidarity/PBP TDs Bríd Smith and Ruth Coppinger have said they will refuse to stand for the prayer and believe the daily prayer should be scrapped.

Earlier this week, Ms Coppinger suggested that a prayer room be set up in Leinster House to allow members of the Oireachtas to pray and reflect instead of having a formal prayer in the Dáil chamber each day.