A French Bulldog named Baya, who went missing two years ago in Galway, has been reunited with her family after being found in Dublin thanks to the DSPCA.

Gillian Bird of the DSPCA told RTÉ's Morning Ireland that the dog was brought in by a member of the public after being found on a busy road in Dublin.

As is done with every dog, the microchip is checked. Baya was microchipped and the owner had flagged that she was lost or stolen.

As a result, the DSPCA were able to reunite Baya with her delighted owners.

The charity shared a video of the reunion on social media, which Ms Bird says brings a tear to your eye and "shows the importance of microchipping your dog".

She added that the DSPCA have no idea how Baya ended up in Dublin.

Ms Bird said it is really important that anyone who finds or takes on a dog makes sure to check if they are microchipped.

A French Bulldog named Baya, who went missing two years ago in Galway, has been reunited with her family after being found in Dublin thanks to the DSPCA | Read more: https://t.co/rN1YI0Hzjq pic.twitter.com/SzkTumuqv1

The dog's owners, the Nawrocki family from Athenry in Co Galway, are overjoyed to have their pet back.

Ten-year-old Max spoke of how Baya knew exactly where her feeding bowl and bed were when they returned home from Dublin.

He said the prodigal pup seemed to be bonding well with a more recent arrival, Diabolina, another French Bulldog.

Adam Nawrocki said he was overcome with emotion when he heard their dog had been found in Dublin. He recalled spending weeks searching around the area trying to find her when she was stolen, just before Christmas 2020. 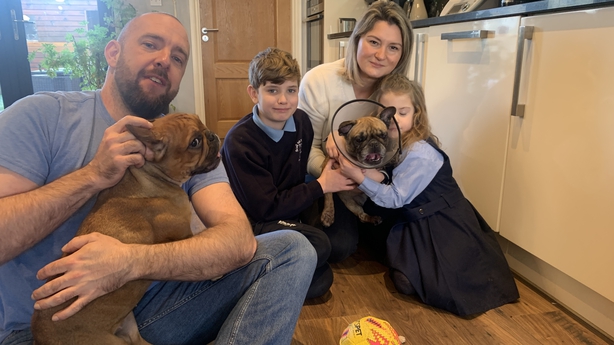 "The children came to us a few days later and told us they didn't want any toys from Santy that year," he said.

"Instead, they wanted to get their dog back".

While CCTV footage showed a black jeep driving towards their house and leaving moments later, efforts to track down the thief or the animal were fruitless.

"She was a very healthy and active pup. She's not like that anymore but we're going to get her back. She's getting stronger everyday and she’s coming back on the right track".

Mr Nawrocki's wife, Justyna, said the pet's return has been the sole topic of conversation at her place of work. 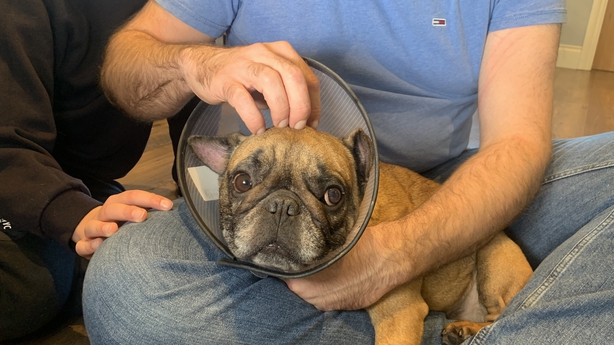 "After two years, we didn't have any more hope, but when Adam called me and told me that he got a phone call that we were going to get her back, I couldn't believe it," she said.

"The happiness I still feel that she's back where she belongs … It's amazing, it's like a miracle."

For five-year-old Mia, the arrival of a second dog is "so exciting".

She had only fleeting memories of Baya's time with the family before the theft but since her return, she has been making up for the absence by showering the dog with hugs.

She said Baya was happy to be home and that she remembered her well because she "stood up and licked me when I saw her".