Angelica Bourgoin strokes the shell of Janus the tortoise, whispering to him quietly as he scuttles in his pen and - his two heads rubbing together - prepares to celebrate his 25th birthday.

Janus, who also has two hearts, two lungs and two distinct personalities, would not have survived long in the wild as he cannot retract his heads into his shell to seek shelter from predators.

But at the Geneva Natural History Museum, where he hatched in 1997, Ms Bourgoin and her team of carers - who believe he is the world's oldest bicephalic tortoise - can cater for his every need.

They feed him organic salad and give him daily massages and baths in green tea and chamomile. For exercise, he goes for regular walks, sometimes with music, and rides on a custom-made skateboard.

"I think it's because of the attention we give him and our devotion that he's still here today," said Ms Bourgoin. 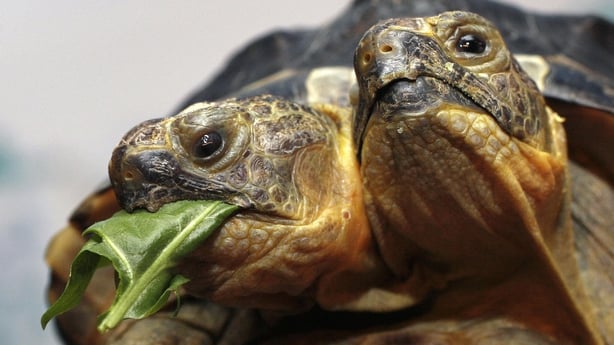 Janus, a Greek tortoise named after the two-headed Roman god of beginnings and transitions, also has a special party to look forward to this weekend.

But it's not all plain sailing.

He is under constant surveillance in case he flips over, which could be fatal, and survived a bladder stone operation in 2020. His heads need periodic treatment with vaseline to stop them getting sore when they rub together.

His two personalities also generate different moods and tastes that can occasionally lead to conflict, for example over which direction to walk.

"The right head is more curious, more awake, it has a much stronger personality. The left head is more passive and loves to eat," Ms Bourgoin said, adding that one head was partial to endives and the other to carrots.