The suspension of ticket sales to Machu Picchu sparked protests among angry tourists and merchants from the town closest to the Inca citadel.

Authorities had recently begun limiting the number of visitors to the jewel of Peruvian tourism to reduce wear and tear but increased the number of daily visitors from 4,044 to 5,044 in July following industry complaints.

The protests took place in the neighbouring town of Machu Picchu, formerly called Aguas Calientes, where visitors arrive by train before boarding minibuses that transport them to climb the ancient site through a narrow mountain pass.

Protestors were angered after tickets to enter Machu Picchu were only being sold in the nearby city of Cusco and not in Aguas Calientes. 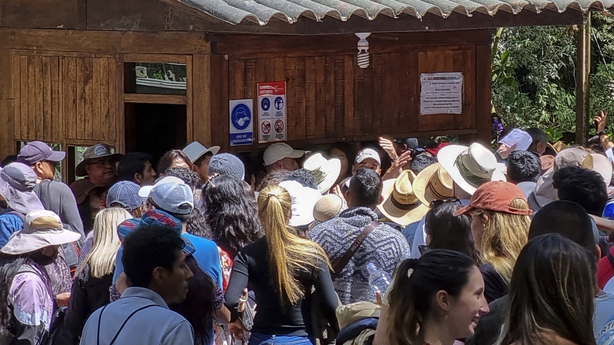 "I paid for my (train) tickets with Inca Rail for one day with a tour guide. We even paid an additional fee for the bus that brings us here to Machu Picchu, where the ruins are and they have not let us in because we do not have the ticket to get in," Mexican Israel Gonzales Rizoo told AFP.

The town's merchants were also very upset, with dozens blocking the railway to prevent the movement of trains.

"We demand the sale of tickets at the offices of the Ministry of Culture of Machu Picchu, and 50% of its totality in person (...) to reactivate our economies," the merchants said in a statement.

This is the second protest in just over two weeks over the lack of tickets to enter the stone citadel - the most visited attraction in Peru.

On 27 July, the available tickets were sold out due to overbooking.

Given the protests this week, the Ministry of Culture indicated that it ordered in person sale of entrance tickets to continue, respecting the limit set to protect the archaeological heritage.

That is because, in the last two weeks, "the average admission to the Llaqta (citadel) of Machu Picchu has remained below the admission capacity," the Ministry said in a statement.

The town is located at the foot of the 2,430-metre-high mountain on which is the famous stone citadel built in the 15th century by the Inca emperor Pachacutec.

UNESCO declared the citadel of Machu Picchu a World Heritage Site in 1983. Since then, the organisation has required Peru to comply with a series of guidelines to preserve the place.