About 500 couples celebrated their unions under a blue sky in a New York event aimed at healing the wounds of the Covid-19 pandemic.

Garlands on their heads, the couples, many of them already married, walked in procession before a symbolic ceremony by an imam, a rabbi and a pastor.

Some could hardly hold back their tears.

"We were supposed to get engaged on March 24, 2020 in Hawaii, but obviously the pandemic cancelled everything," Erica Hackman told AFP, hanging on her husband Richard's arm in the festive atmosphere at Damrosch Park.

The couple, who are expecting a child, got married the following year on a rooftop with just immediate family members in attendance.

"It was a very small wedding... so now this feels like a really big deal to come and celebrate with other people who went through the same thing," said Richard, 37. 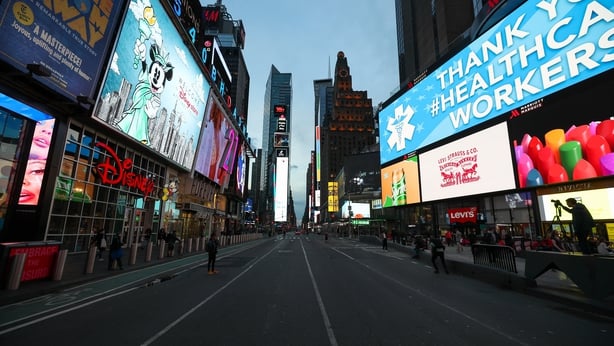 Hit hard by the pandemic, New York came to a standstill in 2020, with images of a deserted Times Square and makeshift morgues becoming emblems of the crisis.

Hosted by the Lincoln Center, the famed arts complex on Manhattan's Upper West Side, the event was billed as a celebration for couples whose weddings had been disrupted.

But everyone was welcome. 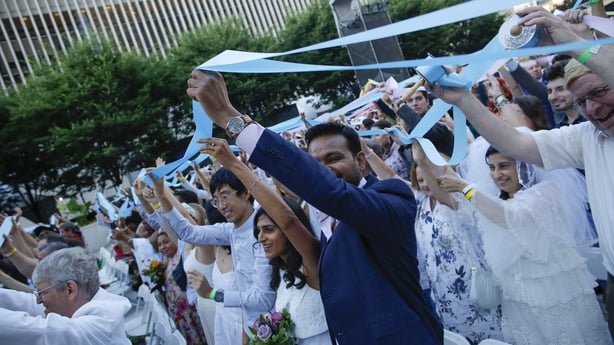 Some, like Esther Friesner Stutzman and her husband Walter Stutzman, had been married for decades.

"He promised me a trip to Paris," she said, smiling.

Wonderful Lloyd-Kline, who married her spouse Anisa in 2008 in Toronto, Canada was happy "to have a day that's just celebrating love.

"We're a same-sex couple, it's very important for us to come out and celebrate and show ourselves out here public as much as we can," the 56-year-old said, before referring to the US Supreme Court, which some fear will undermine marriage equality after its recent decision to roll back abortion rights.

Anne-Marie Colon, 59, strolled among the couples with a photo of her fiance Louis Steven, a professor from the Bronx neighbourhood, who died of Covid in April 2020.

"The week that he passed away, we were supposed to be in Aruba getting married. And so I thought coming today would be a nice celebration for the life that he and I had together for 11 years," she said.