A Pakistani minister has caused a storm in a teacup by urging citizens to cut back on drinking "chai" as a way to preserve foreign currency that pays to import the leaves used in brewing the popular beverage.

Pakistan is the world's biggest importer of tea, known locally as "chai", with the latest government figures showing it pays over €490 million a year to bring in the commodity, mostly from Kenya.

The country is suffering a long-brewing economic crisis, however, with dwindling foreign reserves used to pay crippling debt.

"I would also appeal to the nation to cut down one or two cups of tea because the tea we import is also imported on credit," Ahsan Iqbal, minister for planning and development, said. 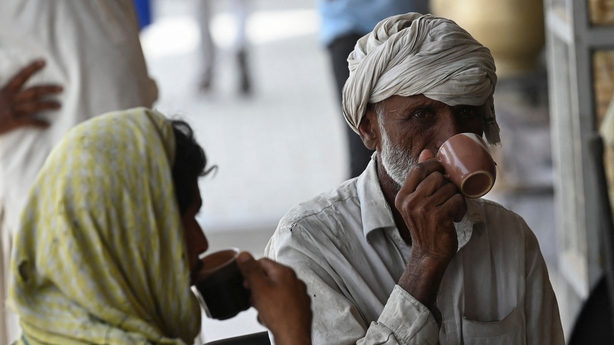 Pakistanis drink tea in many forms - black, green, hot, cold, sweet, salted and spiced - but the most popular is made by brewing the leaves in boiled sweetened milk.

Mr Iqbal's comments prompted outrage on social media and in tea rooms across the country.

"Why should we reduce the use of tea... we drink at our own expense, we don't drink with government money," said Jan Muhammad, 45, a truck driver who says he drinks 15 to 20 cups a day.

"When you drive and you can't see the road... then there is a risk of an accident. That's why 20 cups are compulsory," he told AFP.

"I take three, four cups in the morning, then three in the afternoon and three, four late night," he said. "This is my addiction."

At the same restaurant, Tanveer Iqbal agreed that people should cut down, even as he and his four children sipped piping hot cups of the drink.

The university professor noted tea was routinely served at almost every meeting, especially those held by government officials.

"How will we reduce the use of tea when tea is the main drink in all the official meetings?" he asked.

Chai usually sells for around 45 rupees (21 cents) a cup at stalls across the country.

"The government has increased its expenditure. They travel in big cars with protocol but we only enjoy tea," concluded Muhammad.