It looks like a normal car but the white taxi has nobody driving it, and communicates with customers digitally to obtain directions and take payment.

Beijing this week approved its first autonomous taxis for commercial use, bringing dozens of the so-called "robotaxis" to the streets of the Chinese capital.

The vehicles can only carry two passengers at a time and are confined to the city's southern Yizhuang area.

An employee of the taxi firm also sits in the front of the car in case any sudden intervention is needed, but the vehicle drives itself.

The roll-out is a significant step forward for the driverless ambitions of Chinese tech giant Baidu and start-up Pony.ai, who were given the green light to deploy the cars yesterday.

But it is expected to be years before the taxis operate fully without human intervention, due to regulations and safety requirements.

Developers are hoping Chinese consumers - who have embraced e-commerce, online payments and other digital solutions - will quickly get used to the sensation of travelling in a car without a driver.

More than 500,000 trips have already been made in Pony.ai's robotaxis during earlier testing stages, the Toyota-backed start-up said. 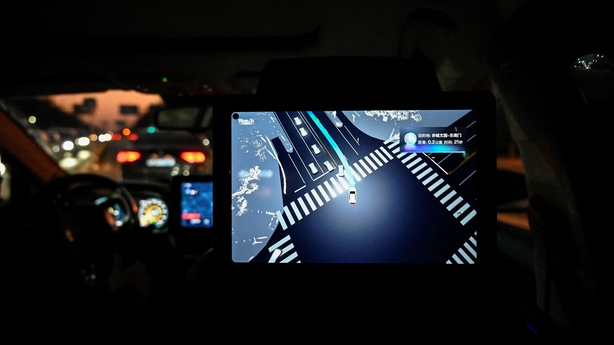 Passengers using Baidu's "Apollo Go" cars must download an app called "Luobo kuaipao" - meaning "radish run" - and can hail a cab at one of 600 pick-up and drop-off points.

Alibaba-backed start-up AutoX and ride-hailing giant DiDi Chuxing have also been running robotaxi pilot projects in cities around the country.