Five tonnes of fish and crustaceans have washed ashore over the past ten days at Spain's Mar Menor, once a lagoon paradise that is slowly dying from agricultural pollution.

The sparkling saltwaters have spat out millions of dead or dying sea creatures on to sandy beaches which have long drawn tourists to the southeast.

Images of dying fish forcing their heads above the surface, gasping for oxygen alongside baskets piled high with countless dead creatures have traumatised the Murcia region, raising urgent questions about the Mar Menor's future.

On Monday, regional officials said they had removed between 4.5 and 5 tonnes of remains but huge numbers of sea creatures are still dying.

"The worst-ever wildlife death toll in the Mar Menor is not yet over," the World Wildlife Fund tweeted.

"It's a terrible situation," said Pedro Garcia, director of regional conservation organisation ANSE, who feared the death toll could be twice that given by the authorities.

Beneath the calm of one of Europe's largest saltwater lagoons - 135 square kilometres separated from the Mediterranean by a 22-kilometre sandbar --a toxic storm has been brewing as a result of years of nutrient pollution from intensive agriculture.

"I haven't been able to swim here for three years with this horrible stench," a woman on the beach told Spain's RTVE public television. Experts say the fish suffocated due to a lack of oxygen caused by hundreds of tonnes of nitrates from fertilisers leaking into the waters.

For years, runoff water loaded with nitrates has entered the lagoon causing a vast bloom of algae which, as it dies and decomposes, decreases oxygen levels in the depths.

Known as eutrophication, the phenomenon is an environmental hazard that causes aquatic ecosystems to collapse due to a lack of oxygen.

Visiting the lagoon, Environment Minister Teresa Ribera accused the regional government of turning a blind eye to farming irregularities in the Campo de Cartagena, a vast area of intensive agriculture that has grown tenfold over the past 40 years.

"There is no room for complacency," she told reporters, indicating that 8,000 hectares of land lacked "adequate irrigation rights" and were "illegally extracting water or using a quantity far above their allocation".
But agricultural groups feel they are being unjustly targeted.

"They are attacking a sector that scrupulously complies with all (environmental) legislation," Vicente Carrion, regional head of the COAG farmers' association, told AFP. 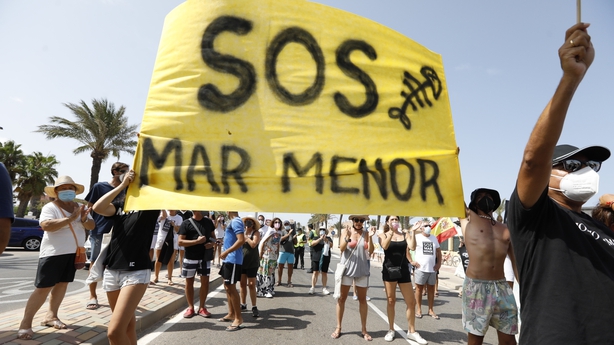 However, for Murcia's association of biologists, there is absolutely no doubt that the nitrate-loaded runoff water "explains the ongoing eutrophication crisis which has caused such high animal mortality, the terrible stench and the cloudiness of the lagoon," it said in a statement.

It is the second such episode in less than two years although this has been the worst by far with the last incident in October 2019 causing the deaths of around three tonnes of marine life.

ANSE's Gracia says that although the nitrate runoff is the main issue, it is not the only problem.

The crisis is exacerbated by "the excessive number of marinas, destruction of the coastline by urban development and by the large quantity of mining sediment" entering the water.

"It's a very damaged landscape," he said.

The mid-August heatwave also did not help Mar Menor's sealife.

According to Spain's Institute of Oceanography, eutrophication "reduces its capacity to resist disruptions like those caused by the thermal stress of a heatwave".