Docked in a river harbour in Warsaw next to coal storage and a rubbish tip, a steel-hulled sailing boat built by a group of homeless people in Poland is preparing for its maiden voyage.

The boat was christened on Saturday with the name "Father Boguslaw" after the priest who initiated the improbable project in 2006 with the aim of reintegrating homeless people back into society.

"The boat is finally alive!" its captain, Waldemar Rzeznicki, who has headed up the project, said as he hoisted a flag up the mast of the 17.8-metre long schooner.

"Every boat has its soul, every boat is different. This one is really unique," he said.

One of the project participants, Slawomir Michalski, 64, who is homeless and also spoke to AFP on a previous visit in 2017, said the result was all the more remarkable for the lack of tools available.

"We didn't have the technical means normally used on shipyards like cranes or forklifts," he said.

"We had simple DIY tools: a cutting torch for the steel, some hammers, sheet metal shears, some grinders," he said.

A lot of the material - like the wood for the masts, the sheet metal or the eight tonnes of lead for the keel - was donated.

The diesel motor comes from an old fishing boat and still needs to be repaired. 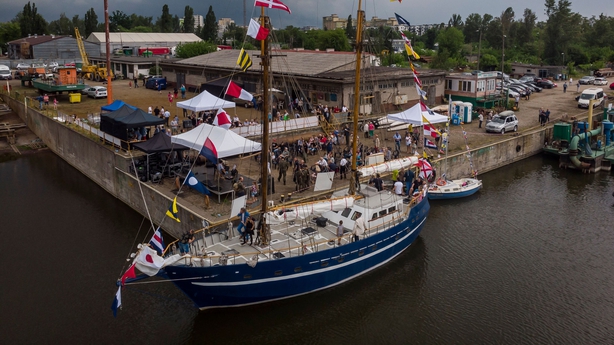 Father Boguslaw Paleczny, who started out as a naval engineer before becoming a priest, did not live to see the project completed.

But the work continued after his death in 2009.

A total of some 300 people - residents of a homeless hostel in Warsaw but also Scouts and volunteers - took part in the construction.

Some worked only a day or two, others several weeks or even years.

"We have completed his testament. It is as if this was his child," Mr Michalski said.

There is still work to do before the boat sets off on a planned 418-kilometre journey down the Vistula River to the port of Gdansk.

The boat needs a navigations system, electrics and safety equipment.

But for Marek Metrak, one of the homeless people involved in the project from the start, the aim has already been achieved.

"The project changed my life in a radical way - 180 degrees. I learned that when I start something, I can finish it. Before it was the opposite," he said.

"I have gained a new life. Like this boat which has been put in the water and can sail, I too have become independent," the 74-year-old said.

"Just two weeks ago, I got the keys of my new house from the council. I'm writing books. I don't drink or smoke any more. I feel younger," he said, proudly holding out his house keys.