Ten years of war in Syria have upended the lives of millions of Syrians, pummelled the economy, and ravaged key infrastructure.

Here are some numbers:

387,000: people killed since the start of the war in 2011 with the brutal repression of anti-government protests, according to the Britain-based Syrian Observatory for Human Rights war monitor.

Of those, more than one million Syrian refugee children have been born in exile over the past decade.

6.7 million: people displaced from their homes by fighting inside Syria, many living in camps, says the UN humanitarian agency.

Around 13.4 million people in the country require humanitarian assistance.

Some 100,000 people have died of torture in government-run prisons and around 100,000 are still in jail, the Observatory says.

Some 200,000 people have gone missing, according to the war monitor.

More than 8 years and 3 months: since British Sunday Times journalist John Cantlie was kidnapped by the Islamic State jihadist group in northern Syria on 22 November 2012.

38: instances of the use of chemical weapons, of which 32 were attributed to Syrian government forces, according to the UN.

Around 1,400: people killed in one single alleged regime chemical attack in 2013, according to the United States.

Ten years of fighting have irreversibly changed Syria's map and the lives of more than 20 million people who still live in the country.

More than 13 million people live in areas held by the regime, which now controls more than 60% of Syria, according to UN and Observatory figures respectively.

Some 2.9 million live in a northwest region controlled by Syria's former Al-Qaeda affiliate and allied rebel groups, the UN estimates.

Around 2.6 million live in Kurdish-controlled areas in the northeast.

Around 1.3 million reside in northern areas held by Turkish troops and their Syrian proxies near the border with Turkey.

€1 trillion: economic cost of ten years of war, according to the World Vision charity.

€77bn in revenue has been lost from hydrocarbons, Syria's oil minister said in February.

Around 400 barrels per day of oil were produced before the war, but just 89 bpd were produced in 2020. Of this, up to 80 bpd was in Kurdish areas outside regime control, the oil minister said.

98%: devaluation of the Syrian pound to the dollar on the black market over the past decade. 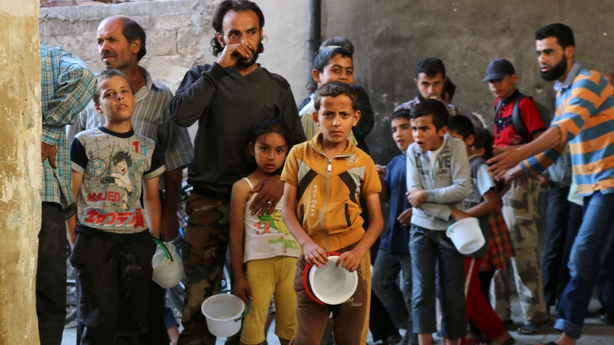 More than 60% of children in Syria are facing hunger, British charity Save the Children says.

70% of electricity network substations and fuel supply lines were put out of service due to the war, the electricity ministry said in 2019.

70% of healthcare workers have fled the conflict, while only 58% of hospitals are fully functional, the UN says.

A third of schools are in ruins or have been commandeered by fighters, according to the UN children's agency.

Over 2.4 million children inside of Syria are out of school, UNICEF says.