A video spreads on social media showing what looks like an officer from the federal Special Anti-Robbery Squad (SARS) attacking a young man in the southern town of Ughelli, in Delta state.

The video goes viral and leads thousands of people to go online and share their own stories of police abuse.

In a matter of days, the hashtag #EndSARS tops the global trends on Twitter, supported by world famous Afrobeat pop stars like Davido and Wizkid. 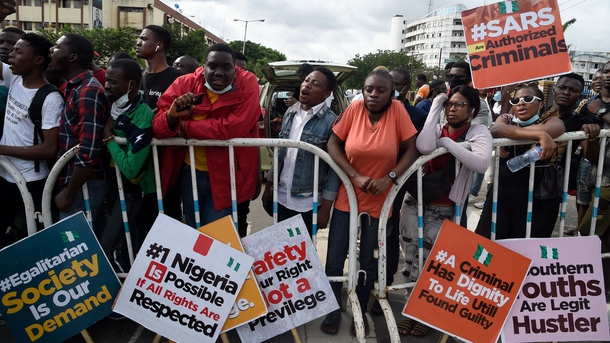 Security forces crack down on protests that break out across the country. In Ughelli one protester and one police officer are killed in the clashes.

The next day, hundreds of people take to the streets in several major cities to protest against police violence.

One person is killed by security forces on 10 October in Ogbomoso, in the southwestern Oyo state. Demonstrations grow and several protests are organised by the Nigerian diaspora, notably in London.

President Muhammadu Buhari, bowing to pressure, announces that SARS will be dissolved, with immediate effect.

The government says a new SWAT unit will replace SARS, with promises that it will be "ethical", and police abuses will be investigated and prosecuted.

However, the announcements by Mr Buhari do not appease protesters and thousands of people take to the streets in several cities.

Demonstrators have made five demands that include structural police reforms and better pay for officers.

Many demonstrators are also calling for more wide-sweeping change in Nigeria, which has the largest number of people living in extreme poverty in the world and a massive youth unemployment rate.

In Surulere, in Lagos state, one protester and one police officer are killed in clashes, according to the Lagos state government. 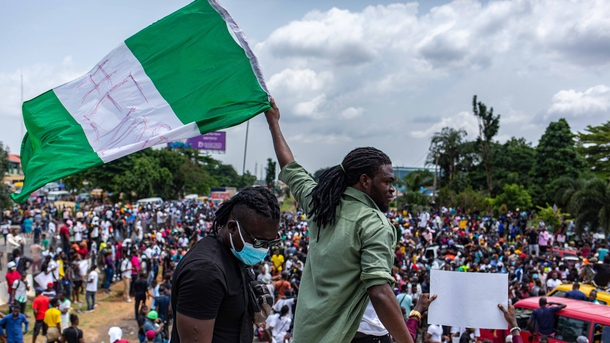 Thousands of people take to the streets in a string of cities, bringing traffic to a standstill in economic hub and largest city Lagos.

Two days later in a statement, the military issues a warning to "troublemakers" and says it "remains highly committed to defend the country and her democracy at all cost".

But protests continue, with flag-waving crowds heading towards the national assembly in the capital Abuja and people gathering to block traffic on key roads in Lagos. 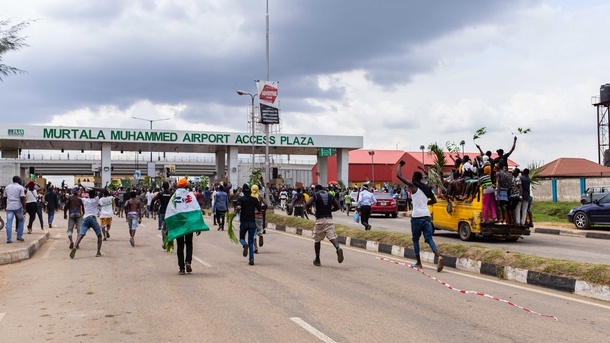 The sprawling megacity of Lagos, home to 20 million people, is paralysed when protesters block the airport and most major roads, causing huge traffic jams. Schools are also shut.

In Benin City in southern Edo state, police say two of their facilities were attacked by "persons posing as #EndSARS protestors".

Twelve suspects are arrested after the incident and the local governor imposes a 24-hour curfew. 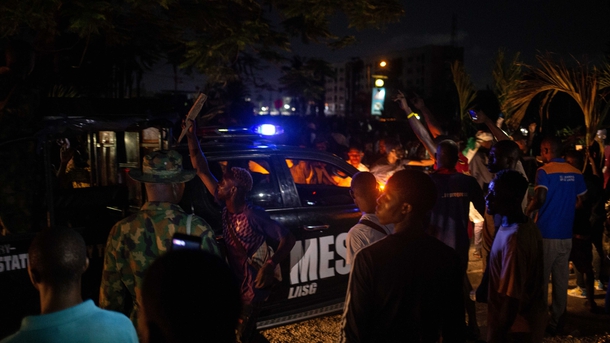 Protests turn violent in a string of cities including Lagos and Abuja.

A round-the-clock curfew is imposed in Lagos and anti-riot police units are deployed nationwide.

That evening more than 1,000 people defy the curfew and gather at Lekki tollgate in Lagos, the epicentre of the demonstrations.

Several protesters are killed by security forces, according to Amnesty.

The Lagos governor initially said 25 people were wounded but that there were not fatalities. He later said the authorities were investigating the death of one person who suffered "blunt trauma" to the head.

In Paris, Manchester United forward Odion Ighalo - a Nigeria international - voiced his support for the protesters after a Champions League match with Paris St Germain