Around 160 sea turtles, many of them injured after getting entangled in plastic waste, have been rescued after washing up on one of the world's longest beaches in Bangladesh.

The Olive Ridley turtles began floating to shore at Cox's Bazar with a huge mass of plastic bottles, fishing nets, buoys and other debris at the weekend.

Surviving turtles were released back into the Bay of Bengal, but some were returning to the beach that stretches 120km.

Around 30 had died and were buried in the sand.

"This is the first time we have seen such a large-scale death and washing up of injured turtles on the beach. It is unprecedented," said Nazmul Huda, deputy director of the local environment department.

"Around 160 turtles have been rescued alive... but after their release in the sea, some of these turtles have come back to the beach. I think they are too weak to stay in the sea."

Many of the turtles sustained injuries from being caught in the estimated 50 tonnes of waste floating in a 10km stretch along the coast. 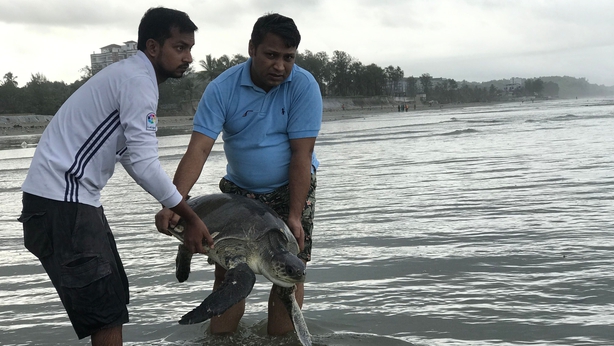 "Some of the turtles did not have legs or heads," said Asaduzzaman Sayem from local conservation group Darianagar Green Boys.

"We rescued a 40kg turtle alive. It was entangled in plastic nets and it did not have legs."

Leading Bangladesh turtle and tortoise expert Shahriar Caesar Rahman of the NGO Creative Conservation Alliance said the creatures were "heavily stressed" and may not survive even after being freed from the waste.

"Local volunteers are trying their best to release them in the sea. But considering the injuries of these turtles it is unlikely they will survive," he told AFP.

"So the best long-term solution will be to establish a rescue and rehabilitation facility for these turtles in Cox's Bazar."

The government is investigating why the turtles came ashore and sent two carcasses to a state-run university to be examined.

But Mr Rahman said he believed the turtles may have become stuck in a massive plastic garbage patch floating in the sea.

"In the long-term if we don't manage pollution in the Bay of Bengal, many of these marine species will face similar fate," he said.

Olive Ridleys are the most abundant of all sea turtles around the world, according to conservationists.

But their numbers have been declining and the species is recognised as vulnerable by the IUCN Red list.