Columns of tanks and troops paraded through Moscow as Russian President Vladimir Putin presided over grand World War II commemorations to stir up patriotic fervour ahead of a vote on extending his rule.

Mr Putin was flanked on Red Square by elderly war veterans in uniforms laden with medals as thousands of troops carrying bright banners and Kalashnikov rifles marched in the blazing sun to mark the Soviet Union's defeat of Nazi Germany.

Forced to postpone the traditional 9 May Victory Day celebrations by the coronavirus pandemic, Mr Putin rescheduled the parade for just a week before the 1 July vote on controversial constitutional reforms.

Among other changes, the reforms Mr Putin proposed earlier this year would reset his presidential term-limit clock to zero, allowing him to run two more times and potentially stay in the Kremlin until 2036.

"It is impossible even to imagine what the world would be if the Red Army hadn't come to defend it," the president said in an address to troops following a minute of silence to remember soldiers who died in the fighting.

Mr Putin hailed the Soviet role in World War II praising the Red army for liberating Europe, ending the Holocaust and saving Germany from Nazism, saying it was "our duty to keep this in mind". 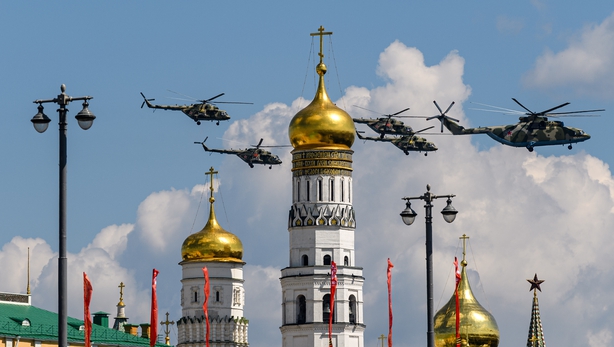 Last month he announced the new dates for both the parade and the vote - initially planned for April - despite Russia still recording thousands of new coronavirus cases every day.

The rate of new infections has fallen in recent weeks and cities including Moscow have lifted anti-virus lockdowns, but critics accuse Mr Putin of rushing ahead with public events to pursue his own political ends.

This year's parade, marking 75 years since the Nazi defeat, showcased 14,000 troops from 13 countries, as well as vintage equipment and the country's latest military hardware.

The date coincides with the anniversary of the first post-war parade on Red Square, when Soviet troops threw down Nazi standards in front of the Lenin mausoleum on 24 June 1945. 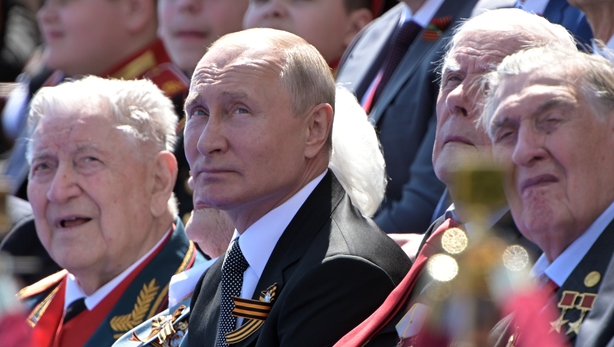 In his two decades in office, Mr Putin has harnessed the legacy of the Soviet victory to boost patriotic sentiment and support for his government.

Ahead of the parade, he slammed the West for "insulting Russia" by playing down the USSR's role in winning the war.

Chinese leader Xi Jinping and French President Emmanuel Macron had been scheduled, before the pandemic, to stand with the Kremlin chief at the parade, in a testament to Russia's growing international influence under Mr Putin.

Instead Mr Putin sat with the heads of former Soviet republics like Belarus president Alexander Lukashenko.

With more than 8,000 recorded deaths and over 600,000 confirmed infections, Russia has the third-largest coronavirus caseload in the world after the United States and Brazil.

The Kremlin said safety precautions were observed in the lead-up to the parade, but participants were not wearing masks.

The parade was held despite a ban on mass gatherings remaining in place. 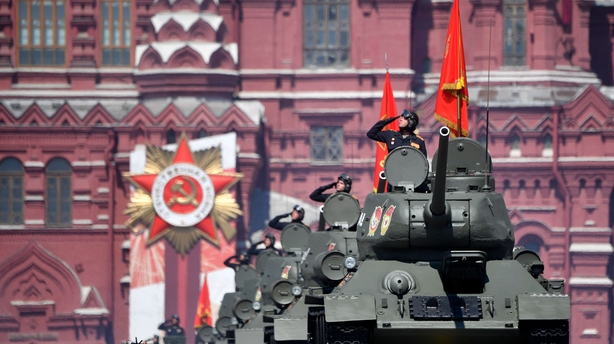 Dozens of regions decided to drop their own parades, fearing a surge in cases, but festivities went ahead in many cities including Saint Petersburg, Volgograd and Simferopol in Russia-annexed Crimea.

Moscow Mayor Sergei Sobyanin advised people to watch the procession on television rather than attend in person. The veterans were quarantined ahead of the event in sanatoriums.

But crowds gathered along the route of the parade mostly ignored social distancing advice, with only a fraction of the spectators in masks, AFP correspondents saw.

"I think it's a great day for a Victory parade," said 70-year-old Natalia Kapustina watching military hardware roll by on the central Garden Ring.

"It's wonderful! I'm proud of our Motherland, that our country has such equipment and that we've got everything we need," said 36-year-old Maria Velikanova. 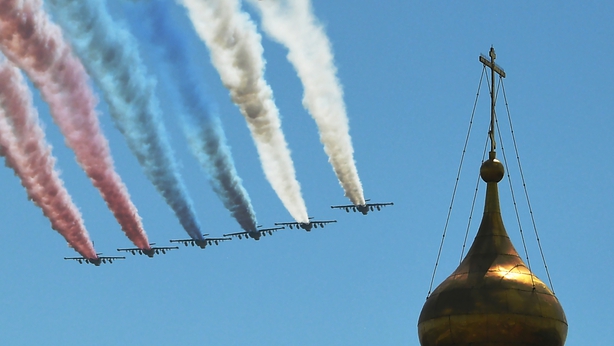 Officials say precautions are also being taken for the constitutional vote, with early balloting starting on Thursday and continuing through to the official vote day on 1 July.

Chief opposition figure Alexei Navalny has criticised authorities for spending vast sums on the parade and urged his supporters to boycott the ballot.

"One crazy, greedy man who has gone mad with power is making the whole country engage in delirium," he said.