A young bear that was rescued from a Colorado wildfire with severe burns on its paws is expected to be ready to be returned to the wild in six to eight weeks.

The bear was found near a wildfire spreading across western Durango, Colorado, on Tuesday.

Firefighters working to tackle the East Canyon Fire alerted wildlife authorities to a "severely burned" bear spotted wandering around the perimeter of the fire.

The bear was then taken to a rehabilitation facility for treatment.

The blaze, burning west of Durango, a municipality in southwestern Colorado, had ripped through over 2,700 acres as of Wednesday, with only 1% containment, according to local reports.

Separately, more than 2,000 people were evacuated from three large wildfires in Arizona yesterday as dry conditions and gusty winds whipped blazes across the US southwest.

More than 1,500 residents fled small communities in mountains about 80k northeast of Phoenix, Arizona, as a wildfire grew to an area larger than the city of Detroit overnight, fire officials reported. 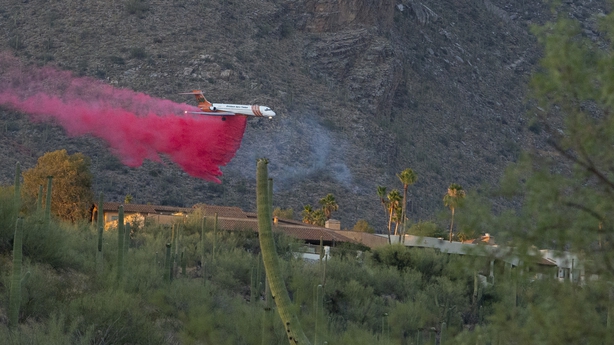 The fire, which began with a vehicle blaze, was the largest of 37 fires burning in the US at 46,515 hectares and already the seventh largest in Arizona history, according to National Interagency Fire Center and National Weather Service data.

"We have hotter temperatures approaching," said Marvin Percha, a meteorologist at the National Weather Service in Phoenix, forecasting above-average temperatures of 43C by Monday.

Around a dozen other fires burned in Arizona, which also faced a record spike in coronavirus cases this week.

The Mangum Fire had blackened 22,980 hectares in the Kaibab National Forest around 65km north of the Grand Canyon, forcing 230 people to leave their homes.

Around 400 homes were evacuated for the Bighorn Fire north of Tucson, which had burned 9,669 hectares.

Large fires have been contained in California, Colorado and Utah this week, but a string of smaller blazes continue to burn.