It is a quiet spring evening at a typical Swiss housing complex in the village of Tafers and on the balcony of a second floor apartment block, professional cyclist Kilian Frankiny is competing in the Tour de Suisse.

Like nearly all sporting events around the world, the annual race has been called off this year because of the Covid-19 pandemic.

So, like the Tour de Flanders earlier this month, organisers instead decided to hold a virtual race.

The 57 cyclists, from 19 teams, put their road bikes onto smart roller trainers at home which were hooked up to the virtual cycling platform. They were represented on the virtual course by avatars in their team uniforms.

As the profile of the course goes up and down, the connected bicycles automatically reflect that in the resistance they offer to the turning of the pedals.

The 26.6 kilometre virtual course - far shorter than a real one would be - led the cyclists from Agarn in the Rhone valley, up a twisting mountain road to Leukerbad and featured 1,192 metres of climbing and descending. 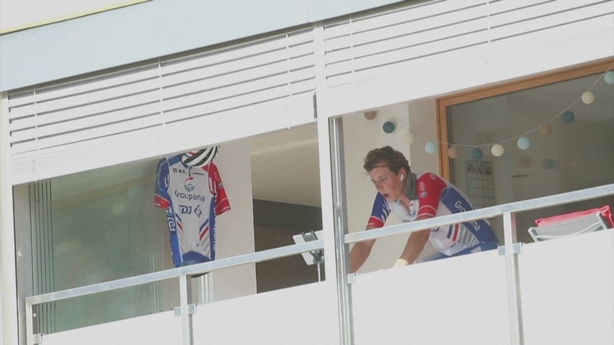 "It's completely different. You don't see the opponents,"  Mr Frankiny, who set up his bike on his balcony where he has a view of the surrounding hills, told Reuters after finishing 36th in the stage which was won by Team Ineos rider Rohan Dennis in 53.07 minutes yesterday.

"You suffer alone. It's more a kind of time trial effort, I think. You're really on your own, and you see the others on the computer.

"It's not like in a real race, but it's fun for one time and I liked it was a good idea from Tour de Suisse to make us ride like this."

Although it was not a long race, he said "it was pretty hard and tough and I was sweating a lot and suffered."

"I think everybody prefers to ride his bike on the real road, but I think maybe in winter, or in a situation like today, it's a funny thing to do," he said.

The five-stage race ends on Sunday.

With sporting events around the world cancelled due to the Covid-19 pandemic, professional cyclists have been taking part in events where the exercise is real but the racing is virtual | Read more: https://t.co/pSCXY96ZfC pic.twitter.com/4LXuZjuies